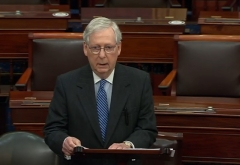 (CNSNews.com) - Senate Majority Leader Mitch McConnell (R.-Ky.) took to the Senate floor this morning to applaud President Donald Trump for what McConnell described as the many policy achievements in his four-year term and then to congratulate Joe Biden for winning the Electoral College and, thus, the presidential election.

“The Electoral College has spoken,” said McConnell. “So, today I want to congratulate President-elect Joe Biden.”

On Monday, the Electoral College voted 306 to 232 in favor of Biden, giving him more than the 270 needed to win the election and be inaugurated on January 20.

“Over the last four years, our country has benefited from a presidential term filled with major accomplishments.     President Donald Trump has repeatedly surprised the skeptics, confounded his critics, and delivered significant policy victories that have strengthened our country,” McConnell said at the beginning of his speech.

Senate Majority Leader Mitch McConnell: “Six weeks ago, Americans voted in this year’s general election. The legal and constitutional processes have continued to play out since then. Yesterday, electors met in all 50 states. So, as of this morning our country has officially a president-elect and a vice president-elect. Many millions of us had hoped the presidential election would yield a different result. But our system of government has processes to determine who will be sworn in on January 20th.

“The Electoral College has spoken.

I look forward to finishing out the next 36 days strong with President Trump. Our nation needs us to add another bipartisan chapter to this record of achievement.”