Sen. Ted Cruz: ‘Barbaric. Speaker Pelosi Refuses to Say an Unborn Baby at 15 Weeks is a Human Being’ 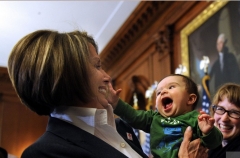 (CNSNews.com) - Sen. Ted Cruz (R.-Texas) forwarded a tweet sent out today by CBS News that reported on a question that Julia Johnson of CNSNews.com had asked House Speaker Pelosi (D.-Calif.) at her press briefing today.

The CBS News tweet quoted the question Johnson asked and Pelosi’s answer and included a video of the exchange. It said:

“Reporter asks Nancy Pelosi, ‘Is an unborn baby at 15 weeks a human being?’

“Pelosi: ‘Let me just say that I am a big supporter of Roe v. Wade. I am a mother of five children in six years. I think I have some standing on this issue as to respecting a woman's right to choose.’”

Commenting on this, Cruz said: “Barbaric. Speaker Pelosi refuses to say an unborn baby at 15 weeks is a human being. Science doesn’t matter to today’s radical Dems—it’s all politics.”

Here is video of Pelosi responding to Johnson's question: