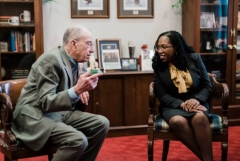 (CNSNews.com) - Sen. Chuck Grassley (R.-Iowa), the ranking member of the Senate Judiciary Committee, gave a speech on the Senate floor on Thursday explaining why he would vote against the confirmation of Judge Ketanji Brown Jackson as a Supreme Court justice.

“Because her record clearly shows she does not believe in, or act within, the limited and proper role of a judge, I will vote against her nomination,” said Grassley.

Later on Thursday, the Senate voted 53 to 47 to confirm Jackson. Three Republicans voted for Jackson. They included Sen. Susan Collins of Maine, Sen. Lisa Murkowski of Alaska, and Sen. Mitt Romney of Utah.

In his floor speech, Grassley said it was “shocking” that Judge Jackson said she did not hold a position on whether individuals have natural rights.

“Part of having a judicial philosophy is having an understanding of the foundational principles in our constitution,” said Grassley. “Natural rights are a part of that system. Judge Jackson explained that she does not ‘hold a position on whether individuals possess natural rights.’

“Our country was founded on the belief that ‘all men are created equal, that they are endowed by their Creator with certain unalienable rights, that among these are life, liberty and the pursuit of happiness,’” he said,

Here is a full transcript of Grassley’s speech explaining why he would vote against confirming Judge Ketanji Brown Jackson to the Supreme Court:

Sen. Chuck Grassley (R.-Iowa): "Since the White House announced Judge Jackson’s nomination, I’ve emphasized the need for a thorough and fair process. Unfortunately, Democrats weren’t concerned with a rigorous examination of her record. The White House and Democrats have shielded important information. We don’t have any non-public documents from her time at the sentencing commission. The Obama White House held back more than 48,000 pages.

"Judge Jackson also gave the White House confidential, non-public probation recommendations for some of her cases. But when we asked for a probation document filed in the Hawkins case, Judge Jackson claimed she was now unable to access records for her old cases. That was allegedly because she’s no longer a district court judge.

"If that’s true, there are many unanswered questions about how information the White House thought was helpful was so easily obtained. So we should take into account that all the helpful information has already been leaked.

"That brings me to the merits of Judge Jackson’s nomination. For judicial nominees, their philosophy about how to decide cases has become a primary consideration.

"Part of having a judicial philosophy is having an understanding of the foundational principles in our constitution. Natural rights are a part of that system. Judge Jackson explained that she does not 'hold a position on whether individuals possess natural rights.'

"That’s shocking. Natural rights are basic to our constitutional system and principles of limited government.

"Our country was founded on the belief that 'all men are created equal, that they are endowed by their Creator with certain unalienable rights, that among these are life, liberty and the pursuit of happiness.'

"Our constitution vests the three branches of the federal government with limited powers. All other power is reserved to the states or retained by the people.

"The principles of limited government are what makes America an exceptional nation and set our constitution apart.

"Judges must have a proper understanding of those principles. Judge Jackson’s record shows that she lacks that foundation. Here are few examples.

"At the hearing, Judge Jackson testified about one of her decisions involving the First Step Act. In that case, prosecutors had rock-solid evidence against a dangerous drug kingpin. But Judge Jackson was displeased that the government pursued a mandatory minimum sentence.

"So she misused a motion for compassionate release to resentence him to the sentence she thought he deserved.

"As a lead author of the First Step Act, I know that’s not what we wrote the statute to do. The Act was supposed to allow elderly inmates and those suffering from terminal illness to petition the court for a sentence reduction.

"The statute also allows for a reduction if the court finds an “extraordinary and compelling” reason. Judges should use great discretion, and weigh against the charge, the danger to society, and the risk of recidivism.

"At her hearing, Judge Jackson said that she based her 'extraordinary and compelling' finding on the non-retroactive change in the law. This radical misinterpretation is terrible and dangerous.

"Senator Durbin and I wouldn’t have been able to broker a compromise if senators thought that judges would rewrite the law and insert their own views from the bench. Decisions like this will make bipartisan work harder to do.

"Young is just one example of Judge Jackson’s lenient approach to criminal law and sentencing. She’s also declined to apply a number of sentencing enhancements Congress put into the sentencing guidelines.

"Make the Road New York v. McAleenan is another case that shows how Judge Jackson used her methodology to reach a result that contradicts the plain text of the law. Congress gave the Secretary of Homeland Security “sole and unreviewable discretion” to decide whether illegal immigrants should be subject to expedited removal within two years. Judge Jackson reviewed the agency’s decision anyway.

"It seems clear why. She went out of her lane to comment on the policy as a 'terrible proposal.' And she claimed the government attorneys made an argument that “reeks of bad faith.” In fact, her decision and her rhetoric are unfounded.

"That’s why her decision earned her a strong rebuke from a panel of liberal and conservative judges when she was reversed by the D.C. Circuit. Judge Millett, an Obama appointee, explained, “[t]here could hardly be a more definitive expression of congressional intent” than 'sole and unreviewable discretion.'

"These are just a few examples of Judge Jackson’s judicial activism. Because her record clearly shows she does not believe in, or act within, the limited and proper role of a judge, I will vote against her nomination."