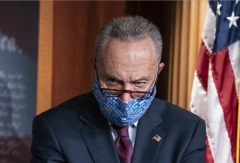 (CNSNews.com) - Senate Minority Leader Chuck Schumer (D.-N.Y.) sent out a tweet on Monday saying that that day would go down as “one of the darkest” in the history of the Senate because Justice Amy Coney Barrett had been sworn in to the Supreme Court.

“Today will go down as one of the darkest days in the Senate’s 231-year history,” Schumer said.

“The Senate GOP is thwarting the will of the people and confirming a lifetime appointment to the Supreme Court in the middle of a presidential election,” he said.

“Senate Republicans are breaking 231 years of precedent and becoming the first majority to confirm a Supreme Court Justice this close to a presidential election day,” Schumer said in a second tweet.