Schumer: ‘Attorney General Bill Barr Has…Shown Us That He’s a Threat to Democracy’ 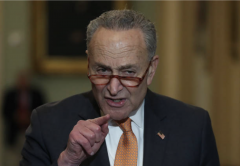 (CNSNews.com) - Senate Minority Leader Chuck Schumer sent out a tweet on Wednesday night that included a CNN story about an interview Attorney General Bill Barr had done with the network and expressed Schumer’s view that Barr is “a threat to democracy.”

“Attorney General William Barr, in an exclusive interview on CNN, broadly defended that actions of police, saying shootings of Black Americans often weren’t racially motivated and weren’t as common as public demonstrations have made them seem,” said the first paragraph of the CNN story.

In the tweet in which he sent out this story, Schumer attacked Barr as a “liar.”

“Attorney General Bill Barr has shown us that he is a liar,” said Schumer.

“He’s shown us that he’s a threat to democracy,” Schumer continued.

“And he’s shown us that he is indifferent to the racism many Americans face,” Schumer said.

“Democrats will not stop fighting for police reform,” said Schumer.