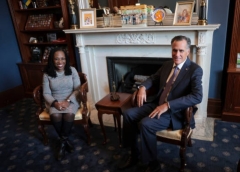 (CNSNews.com) - Republican Sen. Mitt Romney, who now represents Utah but formerly served as the governor of Massachusetts, was one of three Republican senators who voted today to confirm Judge Ketanji Brown Jackson to the United States Supreme Court.

The other two Republican senators who voted for Jackson were Sen. Susan Collins of Maine and Sen. Lisa Murkowski of Alaska. The final vote on the confirmation was 53 to 47.

Romney had announced he was going to vote to confirm Judge Jackson in a written statement he released on Monday in which he called her a “person of honor” who “meets the standard of excellence and integrity.”

“After reviewing Judge Jackson’s record and testimony, I have concluded that she is a well-qualified jurist and a person of honor,” Romney said in his statement.

“While I do not expect to agree with every decision she may make on the Court, I believe that she more than meets the standard of excellence and integrity” said Romney.

“I congratulate Judge Jackson on her expected confirmation and look forward to her continued service to our nation,” he said.

At her confirmation hearings, Sen. Marsha Blackburn (R.-Tenn.) asked Judge Jackson: “Can you provide a definition for the word woman?”

“Can I provide a definition? No, I can’t,” Jackson responded.

“Not in this context. I’m not a biologist,” Jackson said.

In written questions submitted to her by members of the Senate Judiciary Committee, Sen. Ted Cruz (R.-Texas) asked her: “Do you hold a position on whether individuals possess natural rights, yes or no?”

Judge Jackson responded: “I do not hold a position on whether individuals possess natural rights.”