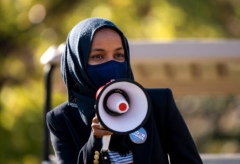 Rep. Ilhan Omar (D.-Minn.) sent out a tweet on Thursday afternoon to mark the end of Ramadan, the holy month in which Muslims fast from sunrise to sunset.

May 13 this year is Eid al Fitr, the day that Ramadan ends.

“#Eidmubarak to you all,” Omar said in her tweet.

“May Allah shower his blessing on us & those suffering around the world,” she said.

The Encyclopedia Britannica says that Ramadan is “the ninth month of the Muslim calendar and the holy month of fasting.”

Ramadan, the encyclopedia says, “is a time for Muslims to practice self-restraint, in keeping with ṣawm (Arabic: “to refrain”), one of the pillars of Islam (the five basic tenets of the Muslim religion). Although ṣawm is most commonly understood as the obligation to fast during Ramadan, it is more broadly interpreted as the obligation to refrain between dawn and dusk from food, drink, sexual activity, and all forms of immoral behaviour, including impure or unkind thoughts. Thus, false words or bad deeds or intentions are as destructive of a fast as is eating or drinking.”

“The end of the Ramadan fast is celebrated as Eid al-Fitr, the ‘Feast of Fast-Breaking,’ which is one of the two major religious holidays of the Muslim calendar (the other, Eid al-Adha, marks the end of the hajj, the pilgrimage to Mecca that all Muslims are expected to perform at least once in their lives if they are financially and physically able),” says the encyclopedia. “In some communities Eid al-Fitr is quite elaborate: children wear new clothes, women dress in white, special pastries are baked, gifts are exchanged, the graves of relatives are visited, and people gather for family meals and to pray in mosques.”