Psaki: Biden ‘Has a Very Personal Relationship With Pope Francis’ 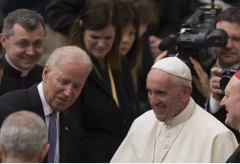 Earlier in the same briefing, when asked whether President Biden agreed with Pope Francis that abortion is murder, Psaki had responded that Biden “believes in a woman’s right to choose.”

At the briefing a reporter asked Psaki: “You talked about the issues the president will talk about with the pope. Can you talk a little more personally about the president’s approach? Does he have any sense of the history of being only the second Catholic president meeting the pope or have we reached the point where that’s just another routine meeting?”

“Well, I think the president’s faith, as you all know, is quite personal to him,” Psaki responded.

“His faith has been a source of strength through various tragedies that he has lived through in his life,” she said.

“Many of you who have served on pool duty know that he attends church every weekend and certainly I expect he will continue to do that,” she said.

“So, the fact that this is, will be his fourth meeting, he has a very personal relationship with Pope Francis,” Psaki said.

“We certainly expect it to be a warm meeting and I would say, yes, George, it absolutely has personal significance to him in addition to being an opportunity to discuss the range of issues--poverty, combating the climate crisis, ending the COVID-19 pandemic--where there is alignment and the ability to have deep substantive discussions.”