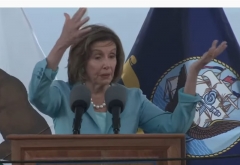 (CNSNews.com) - House Speaker Nancy (D.-Calif.) spoke at the Christening Ceremony for the USNS John Lewis--a Navy vessel named after a late Democratic congressman from Georgia who had a 100-percent pro-abortion voting record--and declared that Rep. John Lewis was “the Conscience of the Congress.”

“John always demonstrated courage with his presence,” Pelosi said. “‘Be there,’ John would say.

“He and I were in the same class,” Pelosi said. “So that means we came in the same class of Congress, so we both served together for over 30 years. So I'm not sure I can get through this to the end of this speech, because we all have so many memories of John.

“John's great courage made him revered, revered in the Congress,” Pelosi said.

“In the halls of the Capitol, he was fearless in the pursuit of a more perfect union, whether voting rights–writing to defend voting rights, ending LGBTQ discrimination, stopping the gun violence epidemic, everything you can name,” she said.

“My colleagues and I will never forget his presence as he led us sitting on the Floor of the House to end gun violence,” said Pelosi. “Well, it was thought that he would be arrested for that, and everybody was lining up to be arrested with John Lewis. Not only then, but other times.

“John had the presence not only to lead the Civil Rights Movement, but also help lead all Americans with a greater understanding of the movement,” she said. “He always wanted us to see the struggle through his eyes. That is why for years, for years he took Members of Congress from across America to Selma.”

The American Bar Association says the following in a biography of Lewis:

“Few individuals in the history of the American civil rights movement cast as long a shadow as Representative John Lewis (1940–2020). Born in rural Alabama as the son of sharecroppers, Lewis first gained fame (at least in his hometown newspaper) by preaching a sermon at his family church before even turning 16. John Lewis then embarked on an incredible life of “good trouble”: as a Freedom Rider, as a founding member of the Student Nonviolent Coordinating Committee (SNCC), as an organizer of the March on Washington, and as a leader of the famed march in Selma, Alabama, that became known as “Bloody Sunday.” By the time he was 25, Lewis had done more than most accomplish in a lifetime, using speech and assembly as the powerful tools for change the Founders intended them to be. And, of course, he was only getting started; Lewis continued to serve as a powerful voice for racial justice and First Amendment freedoms in the halls of Congress for over 30 years.”

As a member of Congress, Lewis voting record earned a 100 percent rating from NARAL Pro-Choice America.

In its analysis of his voting record, NARAL Pro-Choice America noted that Lewis voted against the Pain-Capable Unborn Child Protection Act, which would have banned abortions after 20 weeks. NARAL Pro-Choice America also noted that Lewis voted against a bill “that defunds Planned Parenthood…and includes anti-choice policy riders such as restrictions on abortion care for women who obtain their healthcare through the federal government.”

Here is the full text of Pelosi’s speech at the christening of the USNS John Lewis:

“Officially, as House Speaker, it is my privilege to bring greetings from the Congress of the United States, where our colleague John Lewis served for over 33 years.  Personally, it is my honor to honor our dear friend – and I know when saying that, I speak for all of my colleagues who are here.

“With your permission, I'd like them all to stand so you can see them all at once and –

“I think the rest were introduced.  I do want to acknowledge, again, Nikema Williams, who serves in the position that, that John Lewis served in for so long.

“And, as Dennis acknowledged, that Terri Sewell is carrying the legislation that was mentioned.  Thank you, Terri Sewell.

“And while I take credit for a lot that my Members do, the Chair of the Congressional Black Caucus, Joyce Beatty, organized this trip.  Thank you, Joyce Beatty.  And, of course, all of our Chairs and the Chair of our Caucus, as well.

“Thank you to all who have made this tribute possible.

“And I particularly want to join the others in acknowledging Ray Mabus, Secretary Ray Mabus.  Ray Mabus, who knew that John's life was worthy of recognition – not just a ship, but an entire class of ships.  We’re honored also that General Geurts is here with us as well.  I'll come back to Ray in a bit.

“It's an honor to be with the members of our military, represented by Vice Admiral Ross Myers, Rear Admiral Thomas Anderson.  And let us extend congratulations to the captain of the ship, Captain Kevin Farrin.  Thank you, Captain Farrin.  Rear Admiral Michael Wettlaufer, thank you.

“And again, to all who serve our country in uniform, thank you for the inspiration you are to – for us in Congress, to build a future worthy of your sacrifice.

“We're grateful to David Carver, to Dennis DuBard of NASSCO and the women and women – the men and women of labor who built this ship and with great skill and great patriotism.  Let us thank our workers.

“Now, I know Ray Mabus was great in naming this ship, but I did not know that he designated the sponsor of the ship.  And John Lewis, I'm sure, had a role in that.  We are so inspired by you.  Let me call you Madam Sponsor of the Ship.

“I mean, really, she is – Alfre Woodard Spencer is somebody so very, very special.

“And the matron of honor, happy birthday to you.  Matron of Honor Floydetta ‘Flo’ McAfee Stewart, and the Flower Girl, Gianna.  Where's Gianna?  There she is.  That’s Gianna again.

“Again, this is a ritual.  And we have to recognize all that goes into it intellectually, personally and in a constructive way in every way.  All of us are honored to be with the family.

“And John would have liked that speech, not just because of his brevity.  He was into that for the rest – for the rest of us.

“But wasn't that remarkable?  So we thank Deborah, Marcus, Rosalyn, Jonathan, Anthony, Master, Caitlin.  And again, a member of John's family officially in every way, Michael Collins.

“Thank you, Michael, for making everything so possible for John.

“It is fitting that we honor John Lewis with this formidable ship, because John Lewis was a warrior.  One of the mottos of the Navy is ‘Semper Fortis’ – ‘Always Courageous.’  And John “Lewis was, indeed, always courageous.  How perfect is that the motto of this ship, the ship bearing his names, is ‘[Unbreakable] Perseverance,’ ‘[Unbreakable] Perseverance’ – for this ship will be a beacon to the world reminding all who see it to have the persistence and courage of John Lewis, of John Lewis and the finest navies and merchant marines in the history of the world that this ship is a part of.  Let's hear it for our navies – the Navy and the Merchant Marines.

“I think it's really important to note that this is something fresh and new.  Under Secretary Mabus’s leadership, other warriors for freedom were similarly honored: Chief Justice Earl Warren, Attorney General Robert Kennedy, the suffragist Lucy Stone, abolitionist Sojourner Truth –

“John's great courage made him revered, revered in the Congress.  In the halls of the Capitol, he was fearless in the pursuit of a more perfect union, whether voting rights – writing to defend voting rights, ending LGBTQ discrimination, stopping the gun violence epidemic, everything you can name.  My colleagues and I will never forget his presence as he led us sitting on the Floor of the House to end gun violence.  Well, it was thought that he would be arrested for that, and everybody was lining up to be arrested with John Lewis.

“Not only then, but other times.

“John had the presence not only to lead the Civil Rights Movement, but also help lead all Americans with a greater understanding of the movement.  He always wanted us to see the struggle through his eyes.  That is why for years, for years he took Members of Congress from across America to Selma.

“As we celebrate a ship named for John, I want to recall his presence on a trip we took to Ghana and the leadership of the Congressional Black Caucus.  For it, we went there to mark 400 years since the first enslaved Africans were sent by ships.  We're talking about ships here, right?  By ships to America.  I wish you could have seen the welcome John received.  And I wish you could have seen his emotion at the Door of No Return, where enslaved people were sent through to board the ships that would take them to be enslaved in America.  And John taught us that that was as much a part of American history as the Edmund Pettus Bridge.

“Many of you were on that trip to Ghana with John, so know how emotional that was for us.  That was one – that was July of two years ago, one year before – a short time before we realized the challenge that he was facing.

“As was mentioned that – that lunch counter in Nashville, where he began, he began his civil rights journey, his presence in Nashville today, as we gather here on the day that John left us the day – a year after John passed away.  Today in Nashville, a street is being named in John Lewis’ honor.

“That was a first step for John in the Civil Rights Movement.  On his last day, his last day in Washington, just before he left – Michael, you were with him.  Just before he left, he returned to Atlanta, just about a few days ago – a couple weeks ago last year.  His last day, John Lewis went to Black Lives Matter Plaza to see the movement go into the future.  It was such a beautiful, beautiful smile on his face, to see his work going into the future with Black Lives Matter.  And they will have a vigil in his honor tonight in Washington.

“Last July, John returned to the Capitol for the final time.  He came – having left us, he came to lie in state in the Hall of Heroes.  And that lying-in-state was profound because he lay in state on the same catafalque that was built for another hero – his hero, President Abraham Lincoln.

“So, as we know, John – he always met the challenge to be present.  As he said, ‘When you see something that is not right, not fair, not just, you must speak up.  Find a way to get in the way.  Get in good trouble.’  Right, let's say it all together.”

Speaker Pelosi: “In that spirit let us heed John's guidance to strive for a more perfect union.  May God bless U.S. Navy Ship John Lewis.  And may it always find fair winds and following seas.  May God bless the men and women of the Merchant Marine, who will serve aboard it.  God truly blessed America with the life, legacy and leadership of John Lewis.  May God continue to bless America.  Thank you all very much.”