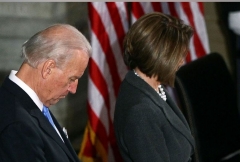 (CNSNews.com) - House Speaker Nancy Pelosi (D.-Calif.) on Bloomberg’s “Balance of Power” television program today, where she promoted the Heroes Act, which the House passed in May, and which, according to the Congressional Budget Office, would spend another $3.4 trillion to deal with COVID-19.

“Well, we don’t want to be considered a bunch of thieves,” Pelosi said on the program.

One of the things the Heroes Act would do, according to its summary, is provide “additional direct payments of up to $1,200 per individual.”

The Senate has not taken the bill up.

Host David Westin asked Pelosi: “We hear Mitch McConnell say he will come forward with something next week. What is it going to take to get the two sides together to get something done? You have the school situation coming up soon, and you also have the Unemployment Insurance, which we’re really coming up within another couple of weeks.”

“In another couple of weeks that will expire,” Pelosi said. “I have no doubt they will come around. In the beginning they said, ‘No, we have spent enough money.’ Now, they’re at $1.3 trillion; that’s not enough. We have $3.4 trillion.”

Later in the discussion about this multi-trillion-dollar spending plan, Pelosi invoked the St. Augustine.

I am fond of quoting Saint Augustine,” she said, “1700 years ago, seventeen centuries ago, who said: ‘Any government that does not exist to promote justice is just a bunch of thieves.’

“Well, we don’t want to be considered a bunch of thieves,” said Pelosi. “We want to promote justice. And in the long run, that makes it for everyone. In fact, in the short run, it does, as well.”