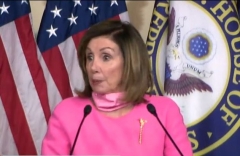 (CNSNews.com) - House Speaker Nancy Pelosi (D.-Calif.), during her press briefing on Thursday, recalled her visit in September 1991 to Tiananmen Square in Beijing, China.

She went there with two other congressmen to honor the victims killed by the Chinese government for participating in the pro-democracy demonstration that took place there in 1989.

“For me, today is a very sad and special day,” Pelosi said at her briefing.

“Today, we solemnly mark 31 years since the Tiananmen Square massacre, 31 years,” she said.

“In 1991, I stood in Tiananmen Square, with a bipartisan group of Members of Congress, bipartisan, and we unfurled a flag reading, ‘To those who died for democracy,’” she said.

“We were chased by the police,” Pelosi said. “It was a question of who could run faster because they were after us with clubs and whatever else.

“They took some of the press film or whatever–film, I mean it's 31 years ago–away from them,” she said. “Sadly, decades later, China's record of repression is unchanged.”

Some American newspapers reported on Pelosi’s visit to Tiananmen Square in 1991.

“Police roughed up and briefly detained three American television crews in Tiananmen Square today after they videotaped a U.S. congressional human rights delegation honoring the Chinese activists who died in the June 1989 suppression of their pro-democracy protests.

“After talks today with Chinese officials in which the legislators said they spoke of the importance of human rights in U.S. foreign policy, the three headed for Tiananmen Square, where student protesters in 1989 marched and held sit-ins calling for more political reform. The “demonstrations were brutally suppressed by the Chinese army on June 3-4, resulting in the deaths of hundreds, possibly thousands.

“The American lawmakers held up a small black-and-white banner bearing the words "To Those Who Died for Democracy in China" in English and Chinese. They laid three white artificial flowers on the ground near the massive Monument to the People's Heroes in the center of the 90-acre square.

“Within seconds of their laying the flowers, guards stationed at the monument "came down and wanted us to stop," Pelosi said. One guard grabbed Miller's arm, but the lawmakers left the square. Police, meanwhile, rushed over to the camera crews of ABC, CBS and Cable News Network, pushing and shoving them and ordering them to produce their tape, crew members said.

“Seven members of the television crews were detained for about 30 minutes at the square, then taken to a nearby police station. They were released about an hour later, and confiscated tape was returned. Police told the journalists it was against health regulations to put flowers on the square and that a new regulation requires advance permission to film on the square, according to Mike Chinoy, CNN's Beijing bureau chief.”

The San Francisco Chronicle ran a story on Sept. 7, 1991 that carried this headline: “Pelosi Is Back in SF, Defends Action in China.”

That story said in part:

“Representative Nancy Pelosi, who returned yesterday from China, said her run-in with Beijing security guards this week was the result of a '’spontaneous’' visit to Tiananmen Square.

“The San Francisco Democrat said she and Representatives John Miller, R-Wash., and Ben Jones, D- Ga., slipped away from the rest of their congressional human rights delegation -- and left behind their escorts from the American Embassy -- to visit the scene where pro- democracy protesters were killed by the Chinese army in 1989.

''‘It was a solemn moment for us to each leave a flower for the people who died at Tiananmen Square,’ Pelosi said at a news conference in San Francisco. She said they also held up a small scroll that declared in English and Chinese characters: ‘To Those Who Died For Democracy in China.’

“The mini-demonstration prompted Chinese police to rough up and briefly detain three American television crews who were filming the event.

“Pelosi, who led the human rights delegation, had several meetings with Chinese leaders to discuss human rights and to urge the release of more than 1,000 Chinese dissidents imprisoned since the Tiananmen Square massacre.”

Here is a transcript from the part of Pelosi’s press conference where she talked about her 1991 trip to Tiananmen Square:

Nancy Pelosi: “For me, today is a very sad and special day. Today, we solemnly mark 31 years since the Tiananmen Square massacre, 31 years.  In 1991, I stood in Tiananmen Square, with a bipartisan group of Members of Congress, bipartisan, and we unfurled a flag reading, ‘To those who died for democracy.’

“We were chased by the police.  It was a question of who could run faster because they were after us with clubs and whatever else.  They took some of the press film or whatever–film, I mean it's 31 years ago–away from them. Sadly, decades later, China's record of repression is unchanged.

“I'm so proud that in a bipartisan way, Congress has long been united in strong support for human rights in China.  This past year the House held Beijing accountable in a number of ways, passing the Uyghur Human Rights Policy Act, which I signed the other day.  Some of you were there – was that yesterday?  It seems like a long time ago.  No, Tuesday, Tuesday. The Uyghur Human Rights Policy Act, the Tibet Policy and Support Act and the Hong Kong Human Rights and Democracy Act.

“We hope that, as the President executes and implements these laws, we can work together to have a strategic plan, not only us in a bipartisan way, but also – and bicameral – but also globally to stop the oppression in China.