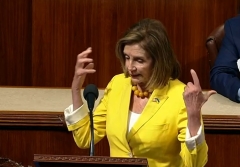 (CNSNews.com) - House Speaker Nancy Pelosi gave a speech on the House floor on Friday as the chamber was preparing to vote on the Inflation Reduction Act in which she declared that that act was about “values espoused by Pope Francis.”

"The climate provisions are–will make a meaningful difference for America's working families,” Pelosi said about the bill. “I’m going to put that in the record, if you promise to read it.

“But it's about clean air and clean water for our children,” she said. “It's about nine million good-paying union jobs. It's about preventing conflict over resources and habitat.

“It's about values--values espoused by Pope Francis, when he said earlier this summer our planet has reached a ‘breaking point’ in the fight against the climate crisis,” she said.

“Extreme weather continues to wreak havoc across the country, around the world,” said Pelosi. “It is clear the cost of inaction far outweighs the cost of action.

“The bill saves the planet while keeping more money in your pockets,” she said. “For working families, you'll save an average of $1,000 a year in lower energy bills. Underserved communities [receive] $60 billion in environmental protection– environmental justice initiatives to ensure that everyone enjoys the benefits of a cleaner green economy.”

The 730-page bill targets taxpayers by giving the Internal Revenue Service an additional $70,963,800,000 for "enforcement activities" and "enforcement programs."