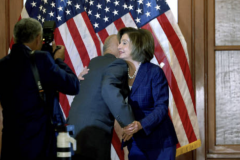 A video of a press briefing Pelosi held with Ghani in the U.S. Capitol today was posted on YouTube by Pelosi’s office. The video shows Pelosi and Ghani coming together at the end of a hallway in the Capitol and embracing in front of a trio of American flags.

They then walk down to a podium in that hallway and speak to reporters.

“Once again, it’s an honor for me, as Speaker of the House, to welcome you to the Capitol of the United States,” Pelosi said as she stood beside Ghani. “Your many friends here look forward to meeting with you this morning.”

“As we enter a new phase of that relationship, we look forward to hearing from you how we can do so with humanitarian assistance,” said Pelosi.

“Thank you for your leadership, yours and Mrs. Ghani’s leadership, in that regard,” said Pelosi.

“We look forward to having a conversation about how we strengthen our relationship through humanitarian assistance,” she said.

“Our friendship is one that is deep and personal, and one that we value,” Pelosi told the Afghan president.

Ghani was first elected president of Afghanistan—which the State Department describes as an “Islamic republic”--in a disputed election in 2014. He was reelected in 2019 in another disputed election.

“The 2014 presidential election was the country's first to include a runoff, which featured the top two vote-getters from the first round, Abdullah Abdullah and Ashraf Ghani,” says the CIA World Factbook.

“Throughout the summer of 2014, their campaigns disputed the results and traded accusations of fraud, leading to a US-led diplomatic intervention that included a full vote audit as well as political negotiations between the two camps,” says the CIA. “In September 2014, Ghani and Abdullah agreed to form the Government of National Unity, with Ghani inaugurated as president and Abdullah elevated to the newly-created position of chief executive officer.”

“After two postponements, the next presidential election was held in September 2019,” says the CIA World Factbook.

“The commission announced preliminary election results on December 22, 2019, indicating that President Ashraf Ghani had won, although runner-up and chief executive Abdullah Abdullah disputed the results, including after final results were announced February 18,” says the State Department 2020 Country Report on Human Rights in Afghanistan.

“Both President Ghani and Abdullah declared victory and held competing swearing-in ceremonies on March 9,” said the State Department. “Political leaders mediated the resulting impasse, ultimately resulting in a compromise, announced May 17, in which President Ghani retained the presidency. Abdullah was appointed to lead the High Council for National Reconciliation, and each of them would select one-half of the cabinet members.”

“In February 2018, Afghanistan adopted a new penal code that explicitly criminalizes consensual same-sex relations,” said Human Rights Watcht. “The penal code punishes musaheqeh (sexual relations between women) with up to one year in prison. It punishes sodomy, defined as ‘penetration of a male sexual organ into a female or a male anus,’ with up to two years in prison.”

The State Department’s 2020 Country Report on Human Rights in Afghanistan also outlines its criminalization and targeting of homosexuality.

A subsection of the State Department report on human rights in Afghanistan is headlined: “Acts of Violence, Criminalization, and Other Abuses Based on Sexual Orientation and Gender Identity.”

“The law does not prohibit discrimination or harassment based on sexual orientation or gender identity,” the State Department says.

“There were reports of harassment and violence of LGBTI individuals by society and society and police,” said the State Department. “Homosexuality was widely seen as taboo and indecent. LGBTI individuals did not have access to certain health-care services and could be fired from their jobs because of their sexual orientation.

“Organizations devoted to protecting the freedom of LGBTI persons remained underground because they could not legally register with the government,” said the State Department. “Even registered organizations working on health programs for men who have sex with men faced harassment and threats by the Ministry of Economy’s NGO directorate and NDS officials.”

In his press briefing with Pelosi, Afghan President Ghani thanked Pelosi: “I would like to thank you personally for your multiple visits, for your deep interest in Afghanistan, for your leadership and particularly the issue that has been very dear to my heart: the empowerment of Afghan women.

“The first lady joins me in sending thanks and regards from all women in Afghanistan to you,” Ghani continued.

“What moves me in my daily work is meeting with young girls from schools, and when I ask them: How many of you want to be president, 88 to 90 percent of the hands go up. That’s the new Afghanistan,” he said.

According to Al Jazeera, Ghani is married to a “Christian-born Lebanese wife, Rula Saade, whom he met during his days at the American University in Beirut.”

According to his official biography, Ghani earned a doctorate in anthropology from Columbia University. He then taught at the University of California at Berkeley in 1983 and at Johns Hopkins University from 1983 to 1991. He then went to work for the World Bank. He returned to his native Afghanistan after the U.S. invasion in 2001, serving as an adviser to the UN Secretary General’s special envoy to the country.

Here is the full text of Speaker Pelosi’s statement at her briefing with Ghani:

House Speaker Nancy Pelosi: “Good morning, Mr. President. Once again, it’s an honor for me, as Speaker of the House, to welcome you to the Capitol of the United States. Your many friends here look forward to meeting with you this morning.  As you know, we’ve had a relationship between our two countries, an intense relationship, for the past twenty years.  As we enter a new phase of that relationship, we look forward to hearing from you how we can do so with humanitarian assistance.

“We look forward to having a conversation about how we strengthen our relationship through humanitarian assistance. Our friendship is one that is deep and personal, and one that we value. Again, this visit that you’re making to the Capitol is an important one for both of our countries, certainly for us.

“With that, I welcome you, Mr. President.”