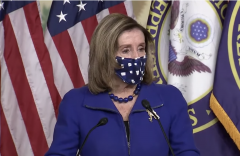 (CNSNews.com) - House Speaker Nancy Pelosi was asked by a reporter at her press briefing today what she would say to people who are asking why it is necessary, since President Donald Trump is out office, to move forward with an impeachment trial of him in the Senate.

“Martin Luther King: ‘Peace is not just the absence of dissension, it is the presence of justice,’” she said.

“So, we will honor the Constitution by establishing justice,” she said.

Here is a transcript of the part of Pelosi press conference where she cited Pope Paul VI and Martin Luther King in explaining why she thinks the Senate should move ahead with an impeachment trial of former President Trump:

Reporter: “Looking ahead to the impeachment trial next week, it will be one month since the attack on the Capitol.”

Reporter: “The former president is long gone. There are plenty of people who say, ‘Why bother? Why go through this entire exercise?’ What do you say to them?”

Pelosi: “Well, I appreciate that question because it seems to me that the answer is self-evident. Again, we’re here to support and defend the Constitution of the United States. The world witnessed the incitement that the president caused to incite a insurrection against our government, against our Capitol, against members of Congress with the use of force and violence. So, for us to--Why bother? Why bother? Ask our Founders, why bother? Ask those who wrote the Constitution. Ask Abraham Lincoln. Ask anyone who cares about our democracy, why we are bothering. You cannot go forward until you have justice. And what did we say about the preamble to the Constitution? Didn’t we say it started out with justice? ‘We the people of the United States in order to form a more perfect union, establish justice.’ You’ve heard me say again and again: Pope Paul VI said: ‘If you want peace, work for justice.” Martin Luther King: ‘Peace is not just the absence of dissension, it is the presence of justice.’ So, we will honor the Constitution by establishing justice.”