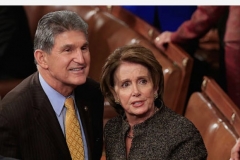 (CNSNews.com) - House Speaker Nancy Pelosi (D.-Calif.) said at her press briefing on Thursday that she and Sen. Joe Manchin (D.-W.V.) are “Italian Americans” and “Catholics” who “have shared values.”

The day before that Manchin himself had put out a statement saying he could not support the $3.5 spending bill that Pelosi is trying to push through the House.

“Every Member of Congress has a solemn duty to vote for what they believe is best for the country and the American people, not their party,” said Manchin. “Respectfully, as I have said for months, I can’t support $3.5 trillion more in spending when we have already spent $5.4 trillion since last March. At some point, all of us, regardless of party must ask the simple question – how much is enough?”

When a reporter asked Pelosi about Manchin’s opposition to the bill, Pelosi focused in her answer on what she called her “shared values” with Manchin.

“Look, I think that Joe Manchin is a great Member of Congress, of the Senate,” she said.

“We're friends.  We're Italian Americans. We get along. Catholic. We have shared values. I have enormous respect for him,” said Pelosi.

Here is the full transcript of Pelosi’s exchange with a reporter about her and Manchin:

Reporter: “Madam Speaker, I don’t have to tell you, you’ve got a Senate problem on your hands.  Joe Manchin said last night that the reconciliation bill is the ‘definition of fiscal insanity.’ He talked about vengeful taxes.  Does that sound like someone who's open to further negotiation?”

Reporter: “And how do you get something pre-conference – how do you move forward with that on the other side of the Democratic Party?”

“If I paid attention to everybody's public statements, oh my goodness, even some that maybe you inadvertently make that are not quite on point.  But he said some other things after that, that said, ‘I'm for reconciliation.’  And did you see that further statement?”

Reporter: “Well, is he saying something privately then to you or to the President that gives you more hope that that can move forward?”

Pelosi: “You think I'm going to talk to you about my conversations with Joe Manchin in here?  If you promise not to tell anyone.”

Pelosi: “Look, I think that Joe Manchin is a great Member of Congress, of the Senate.  We're friends.  We're Italian Americans.  We get along.  Catholic.  We have shared values.  I have enormous respect for him.

“One of the joys of my service in Congress was to work with him to make sure we had the health benefits and pension benefits for our mine workers.  Not that I think clean coal is anything but, you know – well, nonetheless about that. But I do believe in the workers, their needs and the rest. And we did that at the end of last year, working together.  So, we have our common ground.”