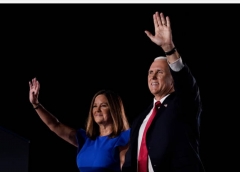 (CNSNews.com) - Former Vice President Mike Pence sent out a series of tweets this afternoon paying tribute to the great conservative Rush Limbaugh, who passed away in the morning.

“Today, America lost a giant with the passing of Rush Limbaugh, and Karen and I sent our most heartfelt sympathies to Kathryn, his brother David, and the millions of Americans who loved and cherished his incomparable voice,” said Pence.

“And during my service as governor and vice president, he was the anchor of conservatism,” Pence said, “giving voice to a movement and fight for the ideals that make America great.”

“Rush Limbaugh’s legacy will live on for generations in the hearts of millions of Americans he inspired,” said Pence. “His matchless voice will never be forgotten.

“May God comfort his family and all those who loved him. God Bless Rush Limbaugh,” said Pence.