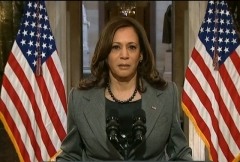 (CNSNews.com) - Vice President Kamala Harris gave a speech in Statuary Hall at the U.S. Capitol this morning, which she opened by likening the Jan. 6, 2021 riot that breached the Capitol building to the Pearl Harbor attack of Dec. 7, 1941 and the al Qaeda terrorist attacks of Sept. 11, 2001.

“Fellow Americans, good morning,” Harris said in the center of the hall—as President Joe Biden stood to her left.

“Certain dates echo throughout history, including dates that instantly remind all who have lived through them—where they were and what they were doing when our democracy came under assault,” she said. “Dates that occupy not only a place on our calendars, but a place in our collective memory.  December 7th, 1941.  September 11th, 2001.  And January 6th, 2021.”

A summary of the Dec. 7, 1941 Japanese attack on Pearl Harbor has been posted online by the U.S. Navy.

“At 6:00 a.m. on 7 December, the six Japanese carriers launched a first wave of 181 planes composed of torpedo bombers, dive bombers, horizontal bombers and fighters,” says the Navy summary. “Even as they winged south, some elements of U.S. forces on Oahu realized there was something different about this Sunday morning.”

“When the attack ended shortly before 10:00 a.m., less than two hours after it began, the American forces has paid a fearful price,” said the Navy summary.

“Aircraft losses were 188 destroyed and 159 damaged, the majority hit before they had a chance to take off,” it said. “American dead numbered 2,403. That figure included 68 civilians, most of them killed by improperly fused anti-aircraft shells landing in Honolulu. There were 1,178 military and civilian wounded.”

“At 8:46 on the morning of September 11, 2001, the United States became a nation transformed,” said the commission’s summary.

“An airliner traveling at hundreds of miles per hour and carrying some 10,000 gallons of jet fuel plowed into the North Tower of the World Trade Center in Lower Manhattan,” it said. “At 9:03, a second airliner hit the South Tower. Fire and smoke billowed upward. Steel, glass, ash, and bodies fell below. The Twin Towers, where up to 50,000 people worked each day, both collapsed less than 90 minutes later.

“At 9:37 that same morning, a third airliner slammed into the western face of the Pentagon,” it said. “At 10:03, a fourth airliner crashed in a field in southern Pennsylvania. It had been aimed at the United States Capitol or the White House, and was forced down by heroic passengers armed with the knowledge that America was under attack.

“More than 2,600 people died at the World Trade Center; 125 died at the Pentagon; 256 died on the four planes. The death toll surpassed that at Pearl Harbor in December 1941,” said the 9/11 Commission’s summary.

“This immeasurable pain was inflicted by 19 young Arabs acting at the behest of Islamist extremists headquartered in distant Afghanistan,” it said.