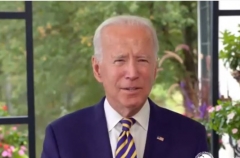 (CNSNews.com) - Former Vice President Joe Biden gave a virtual address to the United States Conference of Mayors on Saturday in which he said he “got to the Senate 180 years ago”—after which he briefly chuckled.

‘That’s why I’ve made it a priority in my entire career to work closely with you from the time I got to the Senate 180 years ago,” Biden said.

Biden then continued: “You know, I suppose my tenure as vice president. You know, if I have the honor of becoming your president, I make this commitment to you: You’re going to have an access directly to the White House and I am going to be right there with you helping you and your communities based on what you think you need and the challenges you are facing.”

Biden was first elected to the Senate in 1972, which was 48 years ago, and took his seat in January 1973, whcih was 47 years ago. He served in the Senate until January 2009, when he became vice president.