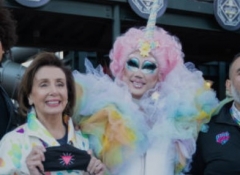 (CNSNews.com) - The $715-billion infrastructure bill that passed the U.S. House of Representatives earlier this month includes a $7,200,000 earmark for building one block of a road in an industrial area of San Francisco that sits within Speaker Nancy Pelosi’s congressional district.

The 196th project listed in this section of the bill is called the “Quint-Jerrold Connector Road.” The bill specifies that it will get $7,200,000.

The San Francisco County Transportation Authority website has a page dedicated to explaining the Quint-Jerrold Connector Road project. The page also includes a photographic depiction of where the one-block road would run.

“The proposed Quint-Jerrold Connector Road will reestablish a connection between Oakdale Avenue and Jerrold Avenue via a new road along the west side of the Caltrain tracks,” says this webpage.

“Vehicles traveling between Oakdale and Jerrold currently use Phelps Street, which runs past many homes and was not designed to handle significant traffic,” it says. “Residents along Phelps have raised concerns about safety and increased noise. Reestablishing the segment of Quint Street that was cut off will provide a safer, more direct connection between Oakdale and Jerrold avenues. Moreover, the Quint-Jerrold Connector Road is part of a package of projects necessary to supporting a potential a new Caltrain station in the neighborhood.”

The webpage includes a subheading entitled “Cost & Funding.” It says: “Total project cost is approximately $19.5 million. The project has received $2.7 million in half-cent sales tax funds from the San Francisco County Transportation Authority and has a commitment of approximately $4.7 million in additional half-cent sales tax funds. The San Francisco Public Utilities Commission has committed $4.125 million to the project.”

If the infrastructure bill that passed the House is made into law, the project will get an additional $7.2 million from federal taxpayers.