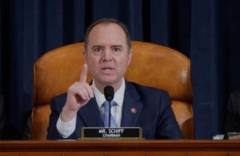 (CNSNews.com) - The $715-billion infrastructure bill that passed the U.S. House of Representatives earlier this month includes a $2,400,000 earmark for that is called a “Community Beautification Project” in Glendale, Calif., which sits in Rep. Adam Schiff’s congressional district.

The 109th project listed in this section of the bill is called the “Community Beautification Project.” The bill specifies that it will get $2,400,000.

“The funding is designated for the surface grinding and pavement of road, removal and repair of concrete improvements, such as sidewalks and driveways, removal and replacement of deteriorated traffic striping and pavement markings, which includes installation of advanced shared roadway green bicycle markings, and sanitary sewer and storm drain improvements,” it says.

“The project is anticipated to improve safety and access for all modes of transportation, while encouraging walking and biking to nearby local schools and community parks, benefiting underserved community constituents, as well as neighboring communities and all city visitors alike,” it says. “As part of this project, approximately 4,300 recycled tires will be used, reducing the amount of scrap rubber tires buried in landfills and impacting the environment. Finally, sewer and drain improvements will prevent surface flooding and improve roadway safety for all modes of transportation.”