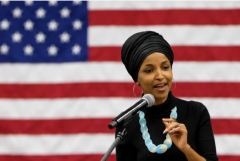 (CNSNews.com) - Rep. Ilhan Omar (D.-Minn.) accused Republicans of engaging in “racist garbage” in a tweet she sent out on Tuesday, which likened today’s Republicans to the segregationists of the Jim Crow era (who were Democrats).

“The Republican playbook today is the same as the segregationist playbook during Jim Crow,” she said. “Make it harder for Black people to vote in the states where there are the most Black people.

The Howard University School of Law has a page on its website describing the “Jim Crow Era.”

“After the Civil War, there was a period from about 1865 to 1877 where federal laws offered observable protection of civil rights for former slaves and free blacks; it wasn't entirely awful to be an African American, even in the South,” says this Howard University School of Law page.  “However, starting in the 1870s, as the Southern economy continued its decline, Democrats took over power in Southern legislatures and used intimidation tactics to suppress black voters.

“Tactics included violence against blacks and those tactics continued well into the 1900s,” it says. “Lynchings were a common form of terrorism practiced against blacks to intimidate them. It is important to remember that the Democrats and Republicans of the late 1800s were very different parties from their current iterations. Republicans in the time of the Civil War and directly after were literally the party of Lincoln and anathema to the South.

“As white, Southern Democrats took over legislatures in the former Confederate states, they began passing more restrictive voter registration and electoral laws, as well as passing legislation to segregate blacks and whites,” says the Howard University School of Law page.