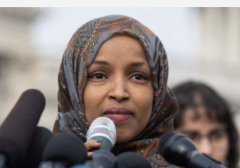 (CNSNews.com) - Rep. Ilhan Omar (D.-Minn.) sent out a tweet on Tuesday criticizing police unions and saying that she refuses to “accept even a penny from the Fraternal Order of Police.”

“I refuse to accept even a penny from the Fraternal Order of Police (and other police-only unions)—unlike labor unions that fight for more humane and dignified workplaces, police unions fight to function with impunity and harm communities,” Omar said in her tweet.

Omar has previously called for dismantling the Minneapolis Police Department.

“The Minneapolis Police Department has proven themselves beyond reform,” Omar said in a tweet she sent out on June 5.

“It’s time to disband them and reimagine public safety in Minneapolis,” she said.