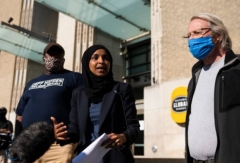 (CNSNews.com) - Rep. Ilhan Omar (D.-Minn.) sent out a tweet on Friday afternoon calling for the Minneapolis Police Department to be disbanded.

She attached to her tweet a commentary in Time by Minneapolis City Council Member Steve Fletcher that also calls for the Minneapolis Police Department to be disbanded.

“The Minneapolis Police Department has proven themselves beyond reform,” Omar said in her tweet.

“It’s time to disband them and reimagine public safety in Minneapolis,” she said.

She then thanked Council member Fletcher for his “leadership on this.”

In his piece published by Time, Fletcher said:

“Every member of the Minneapolis City Council has now expressed the need for dramatic structural change. I am one of many on the Council, including the Council President and the Chair of Public Safety, who are publicly supporting the call to disband our police department and start fresh with a community-oriented, non-violent public safety and outreach capacity. What I hear from most of my constituents is that they want to make sure we provide for public safety, and they have learned their whole lives to equate “safety” with “police,” but are now concluding that need not be the case.”