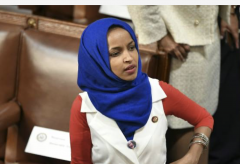 (CNSNews.com) - Rep. Ilhan Omar (D.-Minn.) is calling for a “massive grassroots uprising” to get Congress to order the cancellation of rent and mortgage payments during the COVID-19 crisis. She has also introduced legislation in Congress to accomplish that goal--and to freeze the value of rent payments for five years after they resume.

“Cancel rent and mortgage payments,” Omar said in a tweet on Tuesday that forwarded a tweet from Minnesota Public Radio.

“More than 3.4 million homeowners are temporarily skipping their mortgage payments because they’ve lost income during the pandemic,” said the MPR tweet. “Homeowners say that to catch up on payments, lenders demand big balloon payments they can’t afford.”

In another tweet sent out today, Omar said: “We are not lacking in resources—we are poisoned by greed. As millions of people are struggling to keep a roof over their heads, we need a massive grassroots uprising of #CancelRent and mortgages.

“Tell Congress to move the people’s agenda,” she said.

The tweet included a graphic promoting her bill, H.R. 6515, the “Rent and Mortgage Cancellation Act.”

The language of H.R. 6515 says it is a bill: “To suspend obligations of residential renters and mortgagors to make payments during the COVID-19 emergency, and for other purposes.”

“Notwithstanding any other provision of law, the obligation of each tenant and household of a covered rental dwelling unit to pay rent for occupancy in such dwelling unit shall be suspended with respect to such occupancy during the COVID-19 suspension period,” says Omar’s bill.

It includes similar language for “mortgagors.”

The bill would also set up a fund under the federal Department of Housing and Urban development to have the federal government make the rent and mortgage payments to the landlords and mortgage holders.

But the bill additional sets up restrictions on landlords—including subjecting them to a five-year freeze on rents.

Under a section called “Fair Rental Requirements,” it says:

This section of Rep. Ilhan Omar's "Rent and Mortgage Cancellation Act" would freeze for five years the rent that could be charged by any landlord who was reimbursed by the government during the COVID-19 crisis for a tenant who did not pay rent.
donate
mrc merch