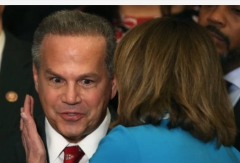 (CNSNews.com) - Rep. David Cicilline (D.-R.I.), who is now serving as a House Impeachment Manager in the Senate impeachment trial of former President Donald Trump, also serves as the chairman of the “Congressional LGBTQ+ Equality Caucus.”

This caucus that Cicilline leads has published its mission statement online. It says: “The LGBTQ+ Equality Caucus serves as a resource for Members of Congress, their staff, and the public on LGBTQ+ issues at the federal level. The Caucus works toward the extension of equal rights, the repeal of discriminatory laws, the elimination of hate-motivated violence, and the improved health and well-being for all regardless of sexual orientation or gender identity and expression.”

In his role as chair of the caucus, Cicilline recently put out a statement congratulating Pete Buttigieg “as the first openly LGBTQ+ person to be confirmed for a position in the Cabinet.”

“I am proud to congratulate Mayor Pete Buttigieg on his confirmation by the Senate to serve as Secretary of Transportation. As a former mayor, he is incredibly well-qualified to serve in this role and help rebuild our country’s bridges, roads, rail lines, and waterways,” said Equality Caucus Chair David Cicilline. “As the first openly LGBTQ+ person to be confirmed for a position in the Cabinet, he will remain a visible role model for young LGBTQ+ people in our country. This is important progress for America and a very proud day for our community.”