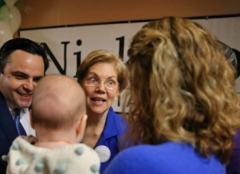 (CNSNews.com) - In the wake of the Supreme Court’s decision in Dobbs vs. Jackson’s Women’s Health Organization, which overturned the Roe vs. Wade decision that had declared abortion a constitutional right, Democratic Sen. Elizabeth Warren of Massachusetts is leading a group of 25 senators calling on the Veterans Administration to provide abortions to female veterans.

“We contend that the VA has the statutory authority and discretion to provide abortions and abortion-related services and resources,” Warren and 24 other senators said in a July 28 letter to VA Secretary Denis McDonough.

“Last month’s disastrous Supreme Court decision in Dobbs v. Jackson Women’s Health Organization overturned the nearly fifty-year precedent established by Roe v. Wade and removed constitutional protection for abortion access from millions of individual in this country, including an ever-growing number of veteran’s and dependents who are able to become pregnant,” the 25 senators said in their letter.

“We contend that the VA has the statutory authority and discretion to provide abortions and abortion-related services and resources,” they said.

“We call on you to take swift and decisive action to ensure that all of our veterans and CHAMPVA beneficiaries can access abortions and all abortion-related services,” these senators said.

In addition to Warren, among the senators who signed the letter were Sen. Mazie Hirono of Hawaii; Senate Majority Whip Dick Durbin of Illinois; Sen. Cory Booker of New Jersey; Sen. Bernie Sanders of Vermont; Sen. Alex Padilla of California; and Sen. Richard Blumenthal of Connecticut.