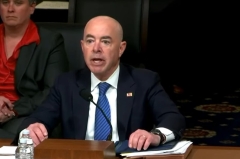 Rep. Bernie Thompson (D.-Miss.), who serves as chairman of the committee, asked Mayorkas: “In your [written] testimony, you discuss how in the two decades since 9-11 the homeland-threat picture has shifted dramatically from foreign terrorists to domestic terrorists, in particular racially motivated violent extremists, who present the most lethal threat to the homeland. What is your current assessment of the domestic terrorism threat to our country?”

“Mr. Chairman, it is our assessment that domestic violent extremism poses the greatest terrorism-related threat to our homeland and we have taken a number of steps in the Department of Homeland Security to meet this consequential challenge,” Mayorkas responded.

“First, our Office of Intelligence and Analysis created a separate section in its office to focus on this particular threat stream,” Mayorkas continued.

“Second, we have disseminated an unprecedented number of intelligence and information projects, products, to state and local law enforcement so that they are equipped to recognize and address the challenge in their respective jurisdictions,” he said.

“We also created the Center for Prevention Programs and Partnership—we call it CP3--to equip and resource communities to recognize and address the challenge within their boundaries,” said Mayorkas. “We believe that empowerment of local communities and state and local law enforcement is the best vehicle to address this challenged today.”

In his written testimony, Mayorkas expanded on this theme.

“In the years immediately following the September 11th terrorist attacks, the Department focused on foreign terrorists who sought to harm us within our borders and threaten our interests abroad,” said Mayorkas in his written testimony.

“DVEs are U.S.-based lone actors and small networks who seek to further political or social goals wholly or in part through unlawful acts of force or violence, without direction or inspiration from a foreign terrorist group of foreign power,” said the secretary’s written testimony.

“Today, U.S.-based lone actors and small networks who are inspired by a broad range of violent ideologies, including HVEs and DVEs, pose the most significant and persistent terrorism-related threat to the homeland,” said the DHS secretary.

“The Intelligence Community assesses that racially or ethnically motivated violent extremists (RMVEs) who advocate for the superiority of the white race, including white supremacists, and militia violent extremists (MVEs), present the most lethal DVE movement in the homeland,” Mayorkas said in his written testimony.

“Per a March 2021 DVE assessment by DHS, the Federal Bureau of Investigation (FBI), and National Counterterrorism Center (NCTC), RMVEs are most likely to conduct mass-casualty attacks against civilians, while MVEs typically target law enforcement, elected officials, and government personnel and facilities,” Mayorkas said in his written testimony.