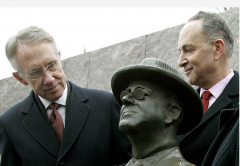 (CNSNews.com) - Senate Minority Leader Chuck Schumer (D.-N.Y.) said in a tweet on Monday that people like Senate Majority Leader Mitch McConnell (R.-Ky.) and President Donald Trump remind him of President Herbert Hoover, who Schumer said decided to do nothing when faced with the Great Depression.

“People like Senator Mitch McConnell and President Trump who say let’s ‘pause’ and do nothing more, they remind me of Herbert Hoover,” said Schumer in his tweet.

“They could lead us into a second Great Depression,” Schumer said.

“When we were on the edge of a potential depression, Herbert Hoover said ‘let’s do nothing,’” Schumer said in a video attached to the tweet. “That’s what these guys are saying, and doing nothing could well create the second Great Depression.

“The people like McConnell and McCarthy and even Trump who say ‘let’s wait and do nothing, well, they remind me of the old Herbert Hoovers,” said Schumer.