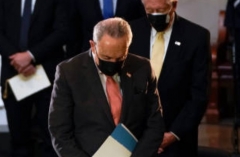 (CNSNews.com) - Senate Majority Leader Chuck Schumer (D.-N.Y.) over the last two days to let Americans know that he was praying and continuing to pray for the victims of people of Boulder, Colo., whose community experienced a horrible mass shooting, and the firefighters and first responders who fought a fire at an assisted living facility in Spring Valley, New York.

“We are closely monitoring the situation in Boulder, Colorado,” Schumer said in a tweet on Monday.

“I’m praying for the Boulder community and the first responders,” he said. “I’m mourning for those we’ve lost.

“This Senate must and will move forward on legislation to help stop the epidemic of gun violence,” Schumer said.

Schumer’s Monday tweet also forwarded a tweet from the Boulder Police Department that noted that one of the lives lost in the grocery store shooting was a local police officer.

“My heart aches for those impacted and any lives lost in the tragic fire in Spring Valley, N.Y.,” Schumer said in his Tuesday tweet.

“I continue to pray for those injured and the firefighters and first responders that showed heroic bravery and saved numerous lives,” said Schumer.

Schumer’s tweet linked to a news story which reported that a resident and a firefighter had both died in a fire at an assisted living home in Spring Valley, N.Y. that started at 12:52 a.m. on Tuesday morning.