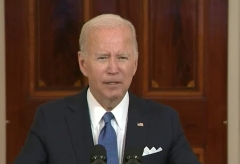 In his speech, Biden said that he believed “Roe v. Wade was the correction decision” and “that most Americans of faiths” accepted it.

“I believe Roe v. Wade was the correct decision as a matter of constitutional law, an application of the fundamental right to privacy and liberty in matters of family and personal autonomy,” said Biden.

“It was a decision on a complex matter that drew a careful balance between a woman’s right to choose earlier in her pregnancy and the state’s ability to regulate later in her pregnancy,” he said. “A decision with broad national consensus that most Americans of faiths and backgrounds found acceptable and that had been the law of the land for most of the lifetime of Americans today.”