Biden After McAuliffe Lost Va. Governor’s Race: ‘I Was Talking to Terry to Congratulate Him Today’ 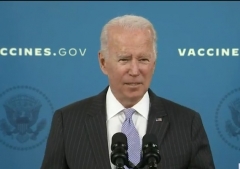 (CNSNews.com) - When President Joe Biden was asked at a press conference on Wednesday “how much responsibility” he took for the bad results the Democratic Party saw in Tuesday’s election, Biden responded that he had called Virginia’s defeated Democratic gubernatorial nominee Terry McAuliffe “to congratulate him.”

“I was talking to Terry to congratulate him today,” Biden said.

A reporter at the briefing asked Biden: “As leader of the Democratic Party, how much responsibility do you take for the dismal results in Virginia and beyond last night?”

“Well, look, yesterday reminded me of—that one of the sacred rights we have is to be able to go out and cast our votes,” Biden responded. “And remember that we all have an obligation to accept the legitimacy of these elections.

“I was talking to Terry to congratulate him today,” said Biden. “He got 600,000 more votes than any Democrat ever has gotten. We brought out every Democrat about there was. More votes than ever has been cast for a Democratic incumbent—umm, not incumbent—a Democrat running for governor.

“And no governor in Virginia has ever won when he is of the same—or he or she—is the same party as the sitting president,” said Biden.