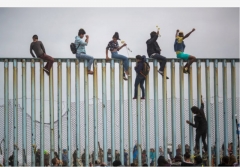 (CNSNews.com) - The Department of Homeland Security announced in a statement on Thursday that it will begin a process to allow approximately 25,000 people into the United States from Mexico who had been previously denied entry because they were seeking to illegally cross the border or enter the United States without the proper documentation.

These individuals—who are now under the “Migrant Protection Protocols”—will be allowed to wait inside the United States while they pursue asylum claims in U.S. courts.

Under the existing protocols, they could only enter to attend their court hearings.

The Trump Administration announced the Migrant Protection Protocols in January 2019. A statement put out by DHS then said: “The Migrant Protection Protocols (MPP) are a U.S. Government action whereby certain foreign individuals entering or seeking admission to the U.S. from Mexico – illegally or without proper documentation – may be returned to Mexico and wait outside of the U.S. for the duration of their immigration proceedings, where Mexico will provide them with all appropriate humanitarian protections for the duration of their stay.”

At the time, DHS explained that the Migrant Protection Protocols would work as follows:

“Certain aliens attempting to enter the U.S. illegally or without documentation, including those who claim asylum, will no longer be released into the country, where they often fail to file an asylum application and/or disappear before an immigration judge can determine the merits of any claim.  Instead, these aliens will be given a ‘Notice to Appear’ for their immigration court hearing and will be returned to Mexico until their hearing date.

“While aliens await their hearings in Mexico, the Mexican government has made its own determination to provide such individuals the ability to stay in Mexico, under applicable protection based on the type of status given to them.

On Tuesday, the Biden DHS announced that it was rescinding the Trump-era protocols and would begin allowing these migrants into the United States. A DHS statement said:

“Beginning on February 19, the Department of Homeland Security (DHS) will begin phase one of a program to restore safe and orderly processing at the southwest border. DHS will begin processing people who had been forced to ‘remain in Mexico’ under the Migrant Protection Protocols (MPP). Approximately 25,000 individuals in MPP continue to have active cases.”

“As President Biden has made clear,” DHS Secretary Alejandro Mayorkas said, “the U.S. government is committed to rebuilding a safe, orderly, and humane immigration system.

“This latest action is another step in our commitment to reform immigration policies that do not align with our nation’s values,” said Mayorkas. “Especially at the border, however, where capacity constraints remain serious, changes will take time. Individuals who are not eligible under this initial phase should wait for further instructions and not travel to the border.  Due to the current pandemic, restrictions at the border remain in place and will be enforced.”