Archbishop of San Francisco: ‘To Begin With the Obvious: Nancy Pelosi Does Not Speak for the Catholic Church’ 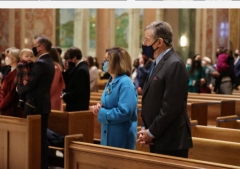 Speaker Nancy Pelosi and her husband, Paul, attend the Mass said before the inaugural of President Joe Biden at the Cathedral of St. Matthew in Washington, D.C., Jan. 20, 2021. (Photo by Chip Somodevilla/Getty Images)

“To begin with the obvious: Nancy Pelosi does not speak for the Catholic Church,” said the archbishop.

“She speaks as a high-level important government leader, and as a private citizen,” he said. “And on the question of the equal dignity of human life in the womb, she also speaks in direct contradiction to a fundamental human right that Catholic teaching has consistently championed for 2,000 years.”

“Speaker Pelosi has chosen this week to impugn the motives of millions of Catholics and others for choosing to make voting on the issue of abortion their priority and accuses them of ‘selling out democracy,’” said the archbishop. “This is not the language of unity and healing.  She owes these voters an apology.”

The archbishop went on to say that someone who favors abortion—which Pelosi does—cannot be a “Catholic in good conscience.”

The archbishop was responding to remarks Pelosi had made on Monday in an appearance on former Sen. Hillary Clinton’s podcast. On that podcast, Pelosi had said it gave her “great grief as a Catholic” that Trump was elected because of his position in opposition to abortion and the support he drew from pro-life voters.

“Now, there is one other element that I have been talking about for a long time that gives me great grief as a Catholic," Pelosi said. "I think that Donald Trump is president because of a woman’s right to choose."

“When he signed that paper saying these are the judges that I will appoint that was the dog whistle to the Evangelicals, to the Catholics, and all the rest: a woman will not have the right to choose,” said Pelosi.

“And, again,” she said, “there’s a great deal of hypocrisy here with many of these people, of course, are not having thirteen children.”

Pelosi went on to say that she has family members who would he her to “soften” her message on abortion.

“As a Catholic, you know, I come from a family that is, would like to see me soften my message on this subject, but they know this is something I am all the way with,” she said. “So, I understand and I respect their point of view—for them. But that doesn’t mean it’s a point of view for someone else.”

Here is the full text of Archbishop Salvatore Cordileone’s statement about Pelosi:

On Monday, House Speaker Nancy Pelosi criticized prolife voters who voted for Donald Trump on the abortion issue, saying their votes cause her “great grief as a Catholic” and accusing them of “being willing to sell the whole democracy down the river for that one issue.”

“To begin with the obvious: Nancy Pelosi does not speak for the Catholic Church.  She speaks as a high-level important government leader, and as a private citizen.  And on the question of the equal dignity of human life in the womb, she also speaks in direct contradiction to a fundamental human right that Catholic teaching has consistently championed for 2,000 years.

“Christians have always understood that the commandment, ‘Thou shall not kill,’ applies to all life, including life in the womb.  Around the end of the first century the Letter of Barnabas states: ‘You shall not slay the child by procuring abortion; nor, again, shall you destroy it after it is born’ (#19).  One thousand, eight hundred and sixty-five years later, the Second Vatican Council affirmed: ‘Life must be protected with the utmost care from the moment of conception: abortion and infanticide are abominable crimes’ (Gaudium et spes, n. 51).

“Pope Francis continues this unbroken teaching.  Addressing participants in the conference, ‘Yes to Life! - Taking Care of the Precious Gift of Life in Its Frailty’ on May 25, 2019, he condemned abortion in the strongest possible terms: ‘is it licit to eliminate a human life to solve a problem? ...  It is not licit.  Never, never eliminate a human life … to solve a problem.  Abortion is never the answer that women and families are looking for.’ And just yesterday (January 20, 2021) Archbishop Gomez, President of the United States Conference of Catholic Bishops, reiterated the declaration of the U.S. bishops that abortion is for Catholics the ‘preeminent priority.’ In doing so, he acted rightly and collaboratively in his role as USCCB President, and I am grateful to him for doing so.

“Preeminent does not mean ‘only,’ of course. There are certainly many evils we must confront and many goods we must pursue. In his inaugural speech yesterday, President Biden gave a moving call to unity and healing. He offered what I would call a ‘Litany of Compassion’–bringing before the eyes of the nation the suffering of people across a wide spectrum of issues. In my experience, advocates for unborn children also work diligently to be of service in many of these causes as well. Speaker Pelosi has chosen this week to impugn the motives of millions of Catholics and others for choosing to make voting on the issue of abortion their priority and accuses them of ‘selling out democracy.’  This is not the language of unity and healing.  She owes these voters an apology.

“I myself will not presume to know what was in the minds of Catholic voters when they voted for the Presidential candidate of their choice, no matter who their preferred candidate was. There are many issues of very grave moral consequence that Catholics must weigh in good conscience when they vote. But one thing is clear: No Catholic in good conscience can favor abortion. ‘Right to choose’ is a smokescreen for perpetuating an entire industry that profits from one of the most heinous evils imaginable. Our land is soaked with the blood of the innocent, and it must stop.

“That is why, as Catholics, we will continue to speak out on behalf of those who have no voice to speak for themselves and reach out to, comfort and support those who are suffering the scars of the abortion experience.  We will do so, until our land is finally rid of this despicable evil.”