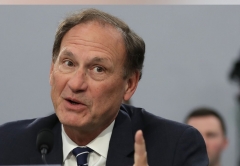 (CNSNews.com) - Supreme Court Justice Samuel Alito issued a dissenting opinion in the court’s ruling today in California v. Texas that struck down by a 7-to-2 vote the suit that 18 states had brought against the Patient Protection and Affordable Care Act, AKA Obamacare.

“Today’s decision is the third installment in our epic Affordable Care Act trilogy, and it follows the same pattern as installments one and two,” wrote Alito in a dissenting opinion joined by Justice Neil Gorsuch.

“In all three episodes, with the Affordable Care Act facing a serious threat, the Court has pulled off an improbable rescue,” said Alito.

Alito noted that in the first Obamacare case before the Supreme Court—National Federation of Independent Business v. Sebelius—the government argued that Congress’s constitutional power to regulate interstate Commerce was what justified the mandate requiring individuals to buy health insurance.

“The Government’s principal defense of the mandate was that it represented a lawful exercise of Congress’s power to regulate interstate commerce, but the Court rejected that unprecedented argument” Alito observed in his opinion on the latest case.

“That might have foretold doom,” Alito continued, “but then, in a stunning turn of events, the threat to the ACA was defused when the ‘penalty’ for failing to comply with the mandate was found to be a ‘tax’ and thus to be justified as an exercise of the Congress’s taxing power.

“By a vote of 5 to 4, the individual mandate—and with it the rest of the ACA—lived on,” Alito noted.

“In the next installment, King v. Burwell, the Court carried out an equally impressive rescue,” observed Alito. “One of the Act’s key provisions provided subsidies to persons purchasing insurance through exchanges established by a ‘State.’ When many States refused to establish such exchanges, the Federal Government did so instead. But the critical subsidies were seemingly unavailable on those exchanges, which had not been established by a ‘State’ in any conventional sense of the term.  Once again, some feared that the Act was in mortal danger, but the Court came to the rescue by finding that the Federal Government is a ‘State.’

“Now, in  the trilogy’s third episode,” Alito continued, “the Court is presented with the daunting problem of a ‘tax’ that does not tax.  Can the taxing power, which saved the day in the first episode, sustain such a curious creature? In 2017, the Congress reduced the ‘tax’ imposed on Americans who failed to abide by the individual mandate to $0. With that move, the slender reed that supported the decision in NFIB was seemingly cut down, but once again the Court has found a way to protect the ACA. Instead of defending the constitutionality of the individual mandate, the Court simply ducks the issue and holds that none of the Act’s challengers, including the 18 states that think the Act saddles them with huge financial costs, is entitled to sue.”

“Can this be correct?” he asks. “The ACA imposes many burdensome obligations on States in their capacity as employers, and the 18 States in question have more than a million employees. Even $1 harm is enough to support standing. Yet no State has standing?”

Alito conclude his dissent by noting how far the Supreme Court has gone to protect Obamacare.

“No one can fail to be impressed by the lengths to which this Court has been willing to go to defend the ACA against all threats,” he wrote. “A penalty is a tax. The United States is a State. And 18 States who bear costly burdens under the ACA cannot even get a foot in the door to raise a constitutional challenge.

“So a tax that is not a tax is allowed to stand and support one of the biggest Government programs in our Nation’s history,” concluded Alito. “Fans of judicial inventiveness will applaud once again.

“But I must respectfully dissent,” he said.