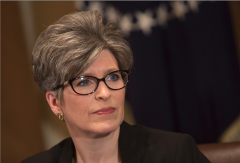 At the Capitol on Thursday, CNS News asked Sen. Ernst, “As the Senate moves forward on the CHIPS bill, should more be done to help American manufacturers compete with China?”

Senator Ernst responded, “I think we should encourage policy that is supportive of this, but I do get very concerned when we’re pumping a lot of money into areas where we, as a federal government, can’t really track those dollars.”

On July 19, the Senate passed the first procedural hurdle to pass the CHIPS Act, a bill that would “open up close to $52 billion in grants for the semiconductor industry to boost manufacturing, supply chain and research and development,” reported HPC Wire.

Semiconductors are substances with “specific electrical properties that enable it to serve as a foundation for computers and other electronic devices,” according to TechTarget. The Senate bill aims to grant funding to U.S. companies that produce semiconductors apparently to give them a competitive edge against Chinese firms.

The COVID pandemic’s disruptive effect on supply chains created a semiconductor shortage that caused product delays and rapid price growth in the tech industry. The automobile industry, in particular, saw severe repercussions that raised the price of cars. Russia’s invasion of Ukraine has further destabilized the semiconductor supply chain, even as demand for tech products increases, according to McKinsey & Company.

The Center for Strategic and International Studies published an analysis highlighting the vulnerabilities created by the lack of U.S. competitiveness in the semiconductor industry. “The disaggregation and offshoring of significant elements of the U.S. semiconductor production chain heightens risks relevant to national security, including the potential for intellectual property theft, the introduction of counterfeit devices, and the disruption of the far-flung and delicate chip supply chain by natural disasters or geopolitical conflicts.”

A report from the National Security Commission on Artificial Intelligence explained some of the risks with these words: “If a potential adversary bests the United States in semiconductors over the long term or suddenly cuts off U.S. access to cutting-edge chips entirely, it could gain the upper hand in every domain of warfare.”

In a July 21 letter, the Republican Study Committee (RSC) in the House of Representatives denounced the CHIPS bill because “it fails to protect U.S. taxpayer dollars intended to boost semiconductor production from flowing to China.” There is a real concern that U.S. manufacturers could use some of the funds to expand their operations into Communist China.

Some of the “holes” in the legislation noted by the RSC include,

-- “The term ‘semiconductor manufacturing’ isn’t specifically defined, but rather left up to Biden’s Secretary of Commerce Gina Raimondo, who has financial ties to Chinese Communist Party.

-- “A recipient of chips funding is still allowed to expand its operations in China so long it wouldn’t constitute a ‘material expansion.’ However, this term is NOT DEFINED AT ALL.

-- “The bill allows the Secretary to forgive a company from having to repay funding even if it illicitly expands in China!”

Former President Donald Trump waged a trade war that began in 2018 against China, frequently citing national security threats posed by imports and the need for economic competition with the Communist state as justification for tariff increases. His policies targeted the automobile, steel and aluminum, and semiconductor industries in particular.

President Joe Biden has embraced a similar attitude towards U.S. industry in his “Made in America” platform. His policy proposals use subsidies and investments in American industries, rather than Trump’s offensive strategy to “stand up to the Chinese government’s abuses,” and Biden insists that “many of the products that are being made abroad could be made here today.”