Press Sec. McEnany: ‘The New York Times and Washington Post’ Should ‘Hand Back Their Pulitzers’ 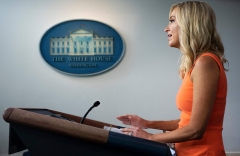 (CNSNews.com) – During a press conference on Monday, White House Press Secretary Kayleigh McEnany criticized the New York Times for its “absolutely irresponsible decision to falsely report that he [President Trump] was briefed on something that he, in fact, was not briefed on.”

Quoting anonymous officials, The Times said the president had been briefed on what Russia was doing, but had made no moves to stop it.

“The intelligence finding was briefed to President Trump, and the White House’s National Security Council discussed the problem at an interagency meeting in late March,” The Times reported, adding that “the White House has yet to authorize any step, the officials said.”

During the press conference, McEnany was asked, “I know you said that President Trump was never briefed on these reports about the Russian bounties and whatnot, but can you say he was briefed today?”

McEnany responded, “Look, I’ll say this—that the U.S. receives thousands of reports a day on intelligence and they’re subject to strict scrutiny. While the White House does not routinely comment on alleged intelligence or internal deliberations, the CIA director, NSA and chief-of-staff can all confirm that neither the president nor vice president were briefed on the alleged Russian bounty intelligence….”

In her ending remarks, McEnany called out the New York Times for reporting that the president had been briefed when he had not been.

McEnany then gave examples of the The Times falsely reporting on the Russian collusion hoax in the years following the president’s election in 2016.