Skip to main content
Sen. Graham: COVID symptoms 'would be far worse' if he hadn't been vaccinated... 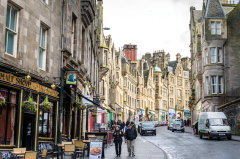 (CNS News) – Civilian employees of the U.S. government, including those who work for the State Department, get a daily allowance of $801.00 when they visit Edinburgh, Scotland on official business during the summer (July to September).

The per diem allowance is a “daily payment instead of reimbursement for actual expenses,” according to the Federal Travel Regulation document, issued by the General Services Administration and cited by the Office of Inspector General (OIG) in its June 2021 report, Audit of Foreign Per Diem Rates Established by the Department of State.

The report explains that the Office of Allowances publishes guidance on foreign per diem rates and establishes a “maximum lodging portion” and a “maximum” M&IE portion.

The Office of Allowances administers allowances and benefits government-wide, not just for State Department workers. The per diem rates are established for all U.S. government civilian employees “related to assignments abroad.”

According to the IOG, “The lodging portion of the foreign per diem rate is intended to substantially cover the cost of lodging at adequate, suitable, and moderately priced facilities, including lodging taxes.”

“The M&IE portion of the foreign per diem rate is intended to substantially cover the cost of breakfast, lunch, and dinner (including related tips and taxes) and incidental expenses (e.g., laundry, dry cleaning, and fees and tips given to porters, baggage carriers, and hotel staff),” according to the OIG.

As explained by FederalPay.org, “If an employee spends less than the per diem rate on a hotel they must return the difference to the government.” But for meals, “Employees are allowed to keep the entire M&IE per diem regardless of whether they spend all of it that day.”

Despite numerous telephone calls, messages left, and emails, neither the State Department nor the Office of Inspector General responded to queries from CNS News asking them to detail the per diem procedure.

However, a former Justice Department employee told CNS News that when he traveled “lodging was reimbursed at the actual cost (up to a set maximum based on location and, in some places, the season), but meals and incidentals were paid at a flat rate (also based on location), and anything unspent above that was just profit.”

“[T]here were certainly employees who ate from the dollar menu and banked a lot,” he said.

According to Expedia, some of the top, 5-star hotels in Edinburgh, Scotland, include the Balmoral Hotel ($552 total for one night in August), the Waldorf Astoria Edinburgh ($432 total for one night), the Intercontinental ($312 total), and the Kimpton Charlotte Square Hotel ($294 total).

In the 4-star hotel category in Edinburgh, there is the Courtyard by Marriott ($128 total, one night), the Fraser suites ($215 total), and the Leonardo Royal ($109 total), among many other establishments.

According to Squaremeal.co.uk, the best restaurants in Edinburgh will cost between $40 and $70 for a meal. The more moderately priced restaurants, according to Tripadvisor.com, are charging around $14 for breakfast and $20 to $30 for lunch.

So, if a State Department employee was sent to Edinburgh, Scotland in the late summer (July-September) with a per diem of $801, he presumably could stay at the highest rated hotel, the Balmoral ($552) and eat at some of the better restaurants ($100 for three meals) and have money to spare -- $55.00 less any incidental expenses.

If the State Department employee stayed at the Courtyard by Marriott ($128) and ate frugally ($60 per day) with few expenses ($20), in late summer, he potentially could save the taxpayers a decent amount of money -- $500 on lodging and $75 on meals and incidentals.

On the low end, Kabul, Afghanistan has a maximum per diem rate of $78, and that is for meals and incidental expenses. No rate is given for lodging.

In its report, Audit of Foreign Per Diem Rates Established by the Department of State, the Office of Inspector General found that the Office of Allowances (ALS) “did not implement processes to establish foreign per diem rates in accordance with [State] Department requirements and ALS standard operating procedures.”

“ALS’s methodology to establish foreign per diem rates needs improvement to adequately cover the cost of U.S. Government employees and eligible dependents traveling overseas,” said the OIG.  “Specifically, OIG found that the rates established by ALS were higher than what was supported by available independent economic data available for three of four posts. The primary reason the foreign per diem rates differed could be attributed, in part, to the inefficient methodology used by ALS to calculate the rates.”

“For example, ALS established per diem rates for more than 1,000 locations worldwide and relied on hotel and restaurant data manually collected by personnel at overseas posts,” said the OIG. “In addition, ALS has not evaluated the potential benefit of using other sources to obtain data for establishing rates. For instance, using available independent economic data would reduce the need for manual data collection and calculations, leading to workload efficiencies, while also potentially resulting in rates that would better reflect current market conditions.”