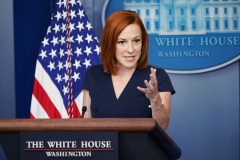 (CNS News) – In reference to the Biden administration working with Facebook to suppress postings it considers “vaccine misinformation,” Senators Tom Cotton (R-Ark.), Ron Johnson (R-Wisc.), and John Barrasso (R-Wyo.) said they opposed this type of partnership because it essentially is the federal government censoring free speech.

At the U.S. Capitol on July 20, CNS News asked the senators if the Biden administration should work with Facebook to suppress postings they consider to be COVID vaccine misinformation.

Sen. Cotton said, “No. Facebook should not be the censorship arm of the federal government. You know, it was only a few weeks ago that it was misinformation on Facebook that the virus might have come from a lab in Wuhan.”

Sen. Johnson told CNS News, “They should—they should keep their hands off that. No, listen, it really is the collusion between big government and big social media companies. That’s a danger for our democracy.”

Sen. Barrasso said, “I’m against censorship, and I think the Biden administration has done—appears to be guilty of it.”

On July 16, the Biden administration admitted that it is working with Facebook to suppress certain posts on the social media platform that contain alleged “vaccine misinformation.”