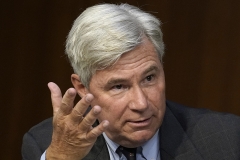 (CNS News) – When asked whether he will read the 2,702-page infrastructure spending bill now under consideration in the Senate, Senator Sheldon Whitehouse (D-R.I.) said, “Very likely not.”

At the U.S. Capitol on Tuesday, CNSNews.com asked the senator, “Will you read all 2,702 pages of the infrastructure bill before you vote on it?”

Sen. Whitehouse responded: “Very likely not, because you—we have a lot of capable staff people who summarize things for us.”