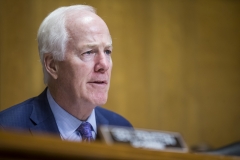 (CNS News) – When asked if the $28.4 trillion federal debt was too much, Senator John Cornyn (R-Texas) said, “Yes, is this a trick question?”

At the U.S. Capitol on Tuesday, CNS News asked the senator, “The debt of the federal government is 28.4 trillion. Is that too much?”

Sen. Cornyn said: “Yes, is this a trick question?”

CNS News asked the follow-up question, “Is there any federal agency or program that you would eliminate to reduce the government spending?”

The senator replied, “I think it’s all about priorities. And, sure, we ought to prioritize what our spending—where our money should be spent. Because we know that without that, there’s going to be a lot of waste, and frankly our priorities not funded.”