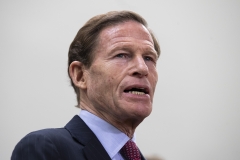 (CNS News) – When asked whether he will be able to read the 2,702-page infrastructure spending bill now under consideration in the Senate, Senator Richard Blumenthal (D-Conn.) said, “I have made a very good start. I’m a pretty—moderately fast reader, but it takes a while.”

At the U.S. Capitol on Tuesday, CNSNews.com asked the senator, “Will you be able to read all 2,702 pages of the infrastructure bill before you vote on it?”

Sen. Blumenthal said, “I have made a very good start. I’m a pretty—moderately fast reader, but it takes a while.”

CNSNews.com asked the follow-up question: “Do you believe you will have it finished—finished reading it by the vote?”

The Senator responded, “I have done a lot of reading of legal documents in my time.”