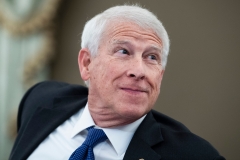 At the U.S. Capitol on Tuesday, CNS News asked Senator Wicker, “The Supreme Court this fall will review a Mississippi law that bans most abortions after 15 weeks of pregnancy. Is an unborn baby at 15 weeks a human being?”

The Supreme Court will hear arguments in Dobbs v. Jackson Women’s Health Organization this fall. Specifically, the court will seek to decide "whether all pre-viability prohibitions on elective abortions are unconstitutional."

The SCOTUS blog reports that Dobbs v. Jackson is a case that could “upend the Supreme Court’s landmark decisions in Roe v. Wade and Planned Parenthood v. Casey, in which the court ruled that the Constitution protects the right to have an abortion before a fetus becomes viable.”