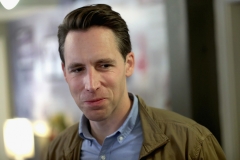 (CNS News) -- Given the National Basketball Association’s close relationship with Communist China and its unwillingness to criticize the regime’s human rights crimes, Sen. Josh Hawley (R-Mo.) said it would be a “great idea” to subpoena NBA Commissioner Adam Silver to testify about the association’s growing relationship with China.

Hawley made his remarks on the Hugh Hewitt radio show, July 13, following the release of a letter he wrote to Silver with questions about China and the NBA.

The July 10 letter, among other things, criticized the NBA for allowing political messaging on jerseys that align with anti-police protests, but apparently not with any support for Hong Kong or victims of the Chinese Communist Party (CCP)

In the letter, Hawley noted Silver’s statement that he hopes to “find mutual respect” with the CCP, which Hawley called “offensive nonsense.”

The letter drew backlash from some left-wing critics, including well-known NBA reporter Adrian Wojnarowski. In an email responding to Hawley’s letter, Wojnarowski said, “F--k you.” Hawley proceeded to tweet a screen shot of Wojnarowski’s email, saying, “Don’t criticize #China or express support for law enforcement to @espn. It makes them real mad.”

Wojnarowski was suspended by ESPN and issued an apology for his actions.

ESPN described Wojnarowski’s email as “completely unacceptable,” “inexcusable,” and said they would address it directly with Wojnarowski, but the specifics will remain “internal.”

Following the controversy surrounding Hawley’s letter, he spoke to Hugh Hewitt on his radio show.

“If the NBA’s going to put these social justice statements on the back of uniforms, which is what they’re doing now, why is it that there’s nothing on there about free Hong Kong or the Uighurs or anything that has to do with the billions of dollars the NBA makes in China?” Hawley said.

“And you see the response from the reporter, and now ESPN, and say, oh, you know, well, the reporter, we’ll take care of that,” added Hawley.  “We’ll silence him. But they don’t want to address the core issue, which is the NBA’s relationship with China. ESPN has a slice of that pie.”

An estimated 1.5 million Muslim Uyghurs are being held in "reeducation" concentration camps in China. (Screenshot, YouTube)

In his letter, Hawley requested a response to five proposed questions to the NBA:

Hawley asked for a response to his questions by July 29, 2020. The NBA has not yet issued a statement responding to Hawley’s letter.

Since 1949, when the Communists took over China, more than 65 million Chinese have been killed for political reasons.