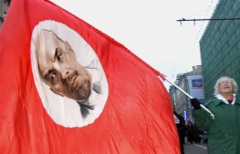 (CNS News) -- The leader of the Revolutionary Communist Party USA, Bob Avakian, has stated that we currently live under a “fascist regime” and, come November, if President Donald Trump is still in office, then people need to vote “against Trump by voting for Biden.”

“We are confronted by -- we are now being ruled by -- a fascist regime,” said Avakian in a statement on the Revolutionary Communist Party (RCP) website. “[T]his election is different. … The question is not whether Biden and the Democrats represent something ‘good,’ or whether, in fundamental terms, the Democrats are ‘better’ than the Republicans. Both of these parties are ruling class political parties, and none of their candidates represent anything ‘good’ in the most basic and essential sense. Biden is not ‘better’ than Trump….”

But “if the Trump/Pence regime is still in power by the time of the election, in spite of mass mobilizations demanding the ouster of this regime, then the struggle against this fascist regime needs to include voting against Trump by voting for Biden,” said Avakian.

“To be clear, this means not a ‘protest vote’ for some candidate who has no chance of winning, but actually voting for the Democratic Party candidate, Biden, in order to effectively vote against Trump,” said the Communist leader.

He added, “At this critical hour, every appropriate means of non-violent action must be utilized to remove this regime from power.”

According to their website, The Revolutionary Communist Party, USA has “taken on the responsibility to lead revolution in the U.S., the belly of the imperialist beast, as its principal share of the world revolution and the ultimate aim of communism. This Party is built on and takes as its foundation the new synthesis of communism that has been brought forward through the body of work and method and approach of Bob Avakian.”

The Trump campaign released a statement on Avakian’s support for Biden. The statement said that Avakian’s endorsement demonstrates that Biden is an “empty vessel for the radical left.”

The campaign also criticized potential vice presidential pick, Rep. Karen Bass (D-Calif.), a left-wing radical who has praised Communist dictator Fidel Castro and traveled to Cuba many times with left-wing activists.  “This is who Biden may put a heartbeat away from the presidency,” said the Trump/Pence campaign.  “Joe Biden is too weak to be president and too weak to stand up to the radical left. … [A] terrifying cabal which now includes active communist leaders.