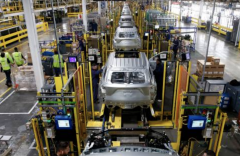 (CNSNews.com) - Despite adding 21,000 manufacturing jobs in the month of February, the United States has lost 561,000 in the past year, according to the Bureau of Labor Statistics.

In January 2017, the month that President Donald Trump was inaugurated, there were 12,367,000 manufacturing jobs in the United States. Since then, manufacturing employment has declined by 129,000.