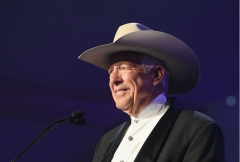 (CNSNews.com) - Foster Friess lived a life that exemplified the American ideal in both the trajectory he followed and the values he embraced.

He grew up in the small northern Wisconsin town of Rice Lake and attended the public high school there—where he played center on the basketball team, ran hurdles for the track team and starred in both sports.

At the same time, he was recognized as an honor student and named valedictorian of his class. 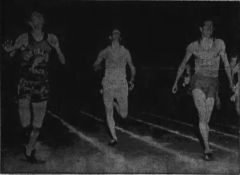 Foster Friess, on the right, running the 180-yard low hurdles for Rice Lake High School in the Eau Claire Invitational Track Meet, May 7, 1957.

Through hard work and dedication, his father, who did not have the opportunity to go to college, and his mother, who did not even attend high school, taught him lessons at least as valuable as those he learned in school.

“During the week, my father drove around northern Wisconsin buying cattle from farmers,” Friess said when he won the Horatio Alger Award in 2012.

“On the weekends, he would collect the cattle he bought and take them to St. Paul to sell,” said Friess. “He was a hard worker and had a zest for life I admired. He also believed in the American dream and served as an inspiration to me. He never achieved much success for himself, but he instilled in me a belief that if you worked hard, you could accomplish anything.”

“My mother was incredibly cheerful,” Friess told the Horatio Alger Association. “She would be working in the kitchen and whistling as she did her chores. She was self-conscious about her lack of education, and she never realized what an incredible person she was. Because of that, I have become more of an encourager to others to believe in themselves.”

Like Ronald Reagan before him, Friess emerged from a small town in middle America and made a big impact on all of America.

After high school, he attended the University of Wisconsin on a scholarship. He served there in the Reserve Officer Training Corps and continued as a scholar athlete, earning good grades, playing freshman basketball and running hurdles for the varsity track team.

In his junior year, he won the Brittingham scholarship to study for the summer at the University of Oslo in Norway.

Foster Friess, center, being congratulated for winning the Brittingham scholarship at the University of Wisconsin, Feb. 2, 1961.

But that scholarship was not the only thing Friess won at the University of Wisconsin. It was there that he also met Lynette Estes, who hailed from the small town of Scottsville in upstate New York.

In the summer of 1958, newspapers across New York state featured many photos of Estes—who was, literally, a beauty queen. First, she was chosen to be the Monroe County Harvest Queen. Then, the Birmingham Press reported: “Blonde, blue-eyed Lynette Estes, 17-year-old beauty representing Monroe County, will reign as queen of the 1958 New York State Fair opening next Friday in Syracuse for nine days.”

The day after the fair opened, the New York Daily News featured a photo of Estes cutting the ceremonial ribbon that had been stretched across the fairground’s entrance. Near its end, the Rochester Democrat and Chronicle photographed her meeting with a Hollywood icon. 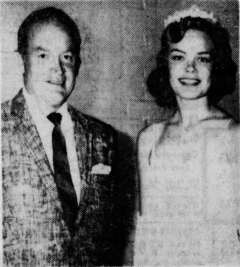 When the fair ended, she was feted on a cruise ship docked in New York City and the Associated Press photographed her being greeted at breakfast by then-Republican Rep. Kenneth B. Keating, who, at the time, was successfully running for the U.S. Senate.

Four years later, the same paper featured another photo and story about Lynette. Its first paragraph said: “Two graduates of the University of Wisconsin were married yesterday in Scottsville Union Presbyterian Church.” The caption on the photo described her as follows: “Mrs. Foster Friess.”

After his marriage, Friess was enrolled in an officer orientation course at the Army Infantry School at Fort Benning, Ga. He was then stationed at Fort Bliss in Texas, where he served as an Army intelligence officer.

When he finished his service in the Army, he went to work for the Brittingham investment firm, which was based in Wilmington, Del. Then, in 1974, he started his own investment firm. The Wilmington News Journal reported just a year later that among “the select Friess clients are motel magnate J. Willard Marriott and several members of the DuPont family.” Additionally, the paper noted, Friess worked with Brittingham “on management of the Nobel Foundation investments in the United States.”

In 1997, then-hedge fund manager (and future CNBC anchor) Jim Cramer was asked in a Yahoo interview: “Which currently active mutual fund manager do you respect the most?” He responded instantly: “Foster Friess.”

The unique talent Friess had as an investor allowed him to accumulate great wealth—which he viewed not as an end in itself, but as a tool he could use to accomplish great things for his neighbors, his country and people in need around the world.

Margaret Brennan of Bloomberg News said to Friess in a 2012 interview: “You’ve been quite generous with a lot of your money.”

“He was the greatest role model of all,” Friess explained that same year to the Horatio Alger Association. “His treatment of people, his forgiveness, and his universal love are inspirational. Jesus spoke about the importance of reaching out to the poor. His words taught me that our money, our health, our family—they aren’t ours but his. We are not the owners—we are the stewards.”

Over the years, Foster and Lynn Friess reportedly gave hundreds of millions to support worthy causes.

After an earthquake hit Haiti in January 2010, for example, they immediately gave $2 million to fund renewal efforts. Then, shortly before Christmas in 2012, they gave another million to Water Missions International, a Christian organization that works to ensure safe water supplies in developing countries.

“Safe water and sanitation are essential for peace and prosperity and the work of Water Missions International is making that a reality for millions of people," Friess said at the time. "Lynn and I are proud to support such a tremendous organization."

Friess and his family moved west to Jackson Hole, Wyo., in 1992 and, in 2018, he unsuccessfully sought the Republican nomination for governor of that state.

This past December, however, he aimed a remarkable act of charity at his old home town of Rice Lake.

“Many graduates of Rice Lake High School’s class of 1958 received a shock when they delved into their Christmas stocking over the holidays,” reported the Rice Lake Chronotype. “Foster Friess, the class’s valedictorian who went on to amass a fortune as an investment manager, had given each of them $100,000 to donate to charities of their choice.”

Friess, who was 81, died of bone marrow cancer in Scottsdale, Ariz., on May 27. He is survived by his wife Lynn—to whom he was married for almost 59 years—and by their four children--Traci, Stephen, Carrie and Michael--and by fifteen grandchildren.

“I knew Foster Friess for over 30 years,” said Media Research Center Founder and President Brent Bozell. “Few were more generous in their funding of the MRC and more generous in spirit to me personally. I am going to miss that giant, soft, goofy, profound soul.”

Foster Friess was a giver, not a taker—who constantly gave back to the communities, the country, and the causes that gave him and so many other Americans the opportunity to live fulfilling lives.