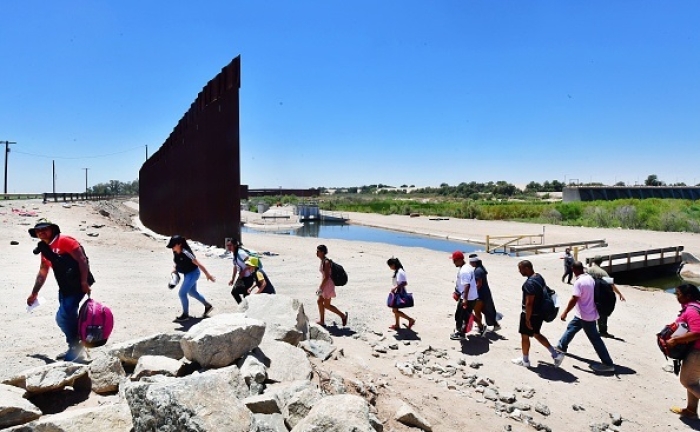 Migrants cross into the US from the Mexico through a gap in the border wall separating the Mexican town of Algodones from Yuma, Arizona, on May 16, 2022. (Photo by FREDERIC J. BROWN/AFP via Getty Images)

(CNSNews.com) - In an apparent about-face, the Biden administration last week announced it will "close four gaps" in an "incomplete border barrier project near the Morelos Dam in the U.S. Border Patrol's Yuma Sector."

That's good, but not good enough, says the mayor of Yuma.

Mayor Douglas Nicholls told Fox News on Monday, "At the end of the day, it's just -- it's just a first step. It's not a complete solution."

Nicholls said closing the four gaps may redirect some of the illegal immigration flow, but it won't prevent people from crossing illegally, as they have been doing in record numbers for months.

"It just helps put the Border Patrol in a better position to understand where they're going to come through and how they can manage it. It also helps protect some of the property, private property, and some of the homes that are up against the border by creating a more secure environment.

"But there are still over 50 other gaps that are currently open in the Yuma Sector, as well as seven miles of open border. So, four of them are great, because they were the four busiest, but it doesn't begin to solve everything that Yuma Sector is dealing with."

During his presidential campaign, Joe Biden said, "There will not be another foot of wall constructed (in) my administration."

Host Sandra Smith asked the mayor if he views the sudden decision to close four gaps in the wall as a "political stunt" before the midterm election:

"Well, I think we need to see a plan, everything from what does Title 42 rescission look like, to how are we going to get the other 51 gaps closed and the seven miles closed?" Nicholls said.

"Those are the things that will have even a more dramatic impact, because this will just shift traffic around. But then also we need to look at, what is the plan to get rid of that pressure or the traction into our country through an illegal process?

"So things that need to be done need to get done in Congress and at the policy level with the president and the secretary to make changes that affect the flow directly."

The Department of Homeland Security explained the decision to close four wall gaps this way:

"Due to the proximity to the Morelos Dam and the swift moving Colorado River, this area presents safety and life hazard risks for migrants attempting to cross into the United States where there is a risk of drownings and injuries from falls. This area also poses a life and safety risk to first responders and agents responding to incidents in this area."

Nicholls said the gap closure is necessary, regardless of why it's happening now:

"And it does need to happen. The reasons it happened and the timing it happens, that's up for debate for those that want to debate that. At this point, I'm looking for positive direction, positive movement from our community."