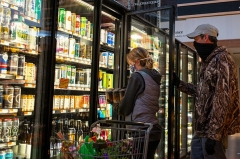 (CNSNews.com) - Treasury Secretary Janet Yellen continues to insist that price inflation -- food, fuel, and all the rest -- is temporary:

"Americans haven't seen inflation like we have experienced recently in a long time. But as we get back to normal, expect that to end," Yellen told CNN's "State of the Union" on Sunday. She said she expects "improvement" by the "second half of next year."

The COVID crisis markedly diminished spending on services and caused a reallocation of spending toward goods. And the supply of goods to Americans has increased substantially, but there's still pressure there.

And there are shutdowns and COVID impacts in Asia where we import many goods from. And so we're experiencing a lot of supply bottlenecks. There's a shortage of semiconductors. And that's pushed up the prices of used cars and caused a reduction in production of new cars.

And this is temporary pains that result from a COVID economy and getting beyond it.

Host Jake Tapper asked Yellen when she expects inflation to "get back to the 2 percent range, which is considered normal? 2022? 2023? When?" he asked:

"Well, I expect that to happen next year," Yellen said. "Monthly rates of inflation have already fallen substantially from the very high rates that we saw in the spring and early summer. On a 12-month basis, the inflation rate will remain high into next year because of what's already happened.

"But I expect improvement by the end of -- by the middle to end of next year, second half of next year."

Yellen disagreed with economist Larry Summers, who has warned that the U.S. is in danger of losing control of inflation:

I think he's wrong. I don't think we're about to lose control of inflation. I agree, of course, we are going through a period of inflation that's higher than Americans have seen in a long time. And it's something that's obviously a concern and worrying them. But we haven't lost control.

And, as we make further progress on the pandemic, I expect these bottlenecks to subside. Americans will return to the labor force as conditions improve. And, remember, the spending that we did that partially has caused this high demand for goods, it's been very important in making sure that the pandemic hasn't had a scarring effect on American workers.

It's given them enough income and support to get through this without -- while still being able to put food on their table and keep roofs over their heads. And when you don't hear people talking about, I'm worried about being able to get a job, remember, that's a very good impact that the rescue packages had.

And what we're talking about with infrastructure and Build Back Better, this is a relatively small amount of spending over a decade. And we need this spending to make our economy productive, to make sure that families have the support to take care of their children and to work. And it will boost labor force participation.

Tapper also asked Yellen about a "pandemic phenomenon some are now calling the Great Resignation," a reference to Americans who are not returning to their pre-pandemic jobs and are out of the labor force, at least right now:

"Well, right now, we have a very tight labor market," Yellen said. "And when the labor market is tight and Americans feel good about their ability to get another job, they're more likely to quit a job. They're getting outside job offers and taking them. And that shows up in those statistics.

"And I -- it's good, I think, to see wages begin to rise, especially for those Americans who had the most insecure jobs and the lowest wages. And to see some improvement there is something that we should be pleased with."