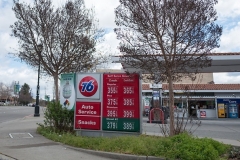 "Could the average gas price in America be $4 a gallon in the United States soon?" CNN's Dana Bash asked Energy Secretary Jennifer Granholm on Sunday.

"As I say, the Energy Information Agency is going to put out their (fuel price) forecast this week. The president is all over this.

“Of course, every president is frustrated because they can't control the price of gasoline, because it's a global market. You can call upon increased supply, which he has done. And OPEC is, unfortunately, controlling the agenda with respect to oil prices. OPEC is a cartel, and it controls over 50 percent of the supply of gasoline.”

The president has not yet said whether he will tap into the Strategic Petroleum Reserve, although "he's certainly looking at that," Granholm said. She said it depends on the price forecast due out in a few days.

Meanwhile, the cost of home heating is going up as well: "Yes, this is going to happen," Granholm said. "It will be more expensive this year than last year."

Then Granholm offered the supposed comfort that Europeans have it worse than we do:

"We are in a slightly beneficial position, certainly relative to Europe, because their choke hold of natural gas is very significant. They're going to pay five times higher.

"But we have the same problem in fuels that the supply chains have, which is that the oil and gas companies are not flipping the switch as quickly as the demand requires. And so that's why the president has been focused on both the immediate term and the long term.

"Let us get off of the volatility associated with fossil fuels and associated with others (she meant the oil industry) who don't have our country's interests at heart and invest in moving to clean energy, where we will not have this problem. And that's so much of what these two bills are focused on," she said, referring to the bipartisan infrastructure bill, which passed the House on Friday; and the Build Back Better bill, which faces a much rockier road to passage.

In an interview with MSNBC on Monday morning, Granholm again slammed the oil industry for rising gasoline prices:

"So we need to make sure that we are telling the truth about where the supply needs to come from. There is nothing that the Biden administration is doing that is preventing oil and gas companies in the United States from doing additional extraction."

First of all, there's no guarantee that oil companies will find oil on the federal land they lease for exploration purposes.

Moreover, the Biden administration, from day one, not only rejoined the Paris climate accords -- it also imposed new regulations and burdens on the oil and gas industry, something that continues to this day, as a Nov. 2, 2021 White House fact sheet makes clear:

According to that Nov. 2 fact sheet:

...The Department of Transportation’s Pipeline and Hazardous Materials and Safety Administration (PHMSA) is implementing the bipartisan PIPES Act by upgrading and expanding pipeline rules that will, among other things, require operators to cut methane leaks and excursions. And the Department of the Interior (DOI) is focusing on opportunities to tackle the venting and flaring of methane from oil and gas operations and well closures on public lands and waters.

One week after taking office, President Joe Biden paused the federal oil and gas leasing program, so his administration could conduct a "comprehensive review and reconsideration of Federal oil and gas permitting and leasing practices" on public lands and in offshore waters, "including potential climate and other impacts..."

Following a court order in June, the Bureau of Ocean Energy Management (BOEM) announced in September that it would hold an oil and gas lease sale for the Gulf of Mexico on Nov. 17, which is nine days from now.

Also See:
Biden’s Energy Sec. Granholm Calls It ‘Hilarious’ That She Would Have a ‘Plan to Increase Oil Production in America’