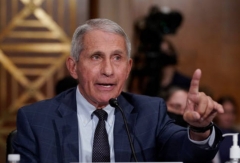 (CNSNews.com) - The advice from President Biden's COVID team is, get vaccinated, get booster shots, and if you're with other people who have done the same, it's safe to attend holiday gatherings.

CNN's Kaitlyn Collins asked Fauci, "I know you said it's okay to be with friends and family if you're vaccinated and boosted, but what is your advice to people about larger settings for New Year's parties?"

"Kaitlyn, I would stay away from that," Fauci said.

"I mean, I have been telling people consistently that if you're vaccinated and boosted and you have a family setting in the home with family and relatives but when you're talking about a New Year's Eve party, we have 30, 40, 50 people celebrating, you do not know the status of their vaccination, I would recommend strongly stay away from that this year. There will be other years to do that, but not this year."

Fauci noted that 214,000 cases of COVID were reported in this country yesterday alone, and even though those cases are not severe in vaccinated people, "we still could have a surge on hospitals, particularly among the unvaccinated, which they're really worried about."

Asked about the high demand for rapid, at-home COVID tests, and the resulting nationwide shortage of those tests, Fauci admitted that the testing situation has always been "problematic."

"We had a conflation of high demands -- high demands because of the concern about omicron, which is a justifiable concern, but the high demand that was triggered by the holiday season, people getting ready to travel, getting ready to go and mix with family members and friends it's been a very, very strong run on testing.

"And, you know, obviously not making any excuses for it, we should have had more tests available but hopefully now, as we get into the first couple of weeks in January, that will get much better."

President Biden has ordered 500 million rapid test kits that will be sent to every home in the nation on request, although details on ordering them have not been announced. But those tests won't be available until later in January, too late for holiday travelers and for nervous hosts and hostesses who want their guests to be tested before arrival.

In a Monday morning interview with MSNBC, Fauci said, "We are in a tough situation with omicron," given its transmissibility and the number of hospitalizations. "It's not something to be taken lightly," he said, despite evidence that the latest mutation may cause milder disease.